MIKAEL LUSTIG insists the SPFL have to follow the Belgian example and award Celtic their ninth successive title – NOW!

The Swedish international defender, who quit the Hoops to join Gent in the summer, endorsed the nation’s league officials’ decision yesterday to abandon the season due to the coronavirus pandemic and hand the Jupiter Pro league championship to Club Brugge.

Lustig believes football is over throughout Europe for this campaign and is adamant the Scottish bosses should no longer hesitate in naming his old club as rightful Premiership winners.

Neil Lennon’s side were leading the race for the crown by 13 points with only eight games remaining and a vastly superior goal difference of plus 25 which would have meant only a colossal and unexpected drop in form would have denied them their 51st flag in their history.

Veteran right-back Lustig, speaking to the Daily Record, said: “It is not any surprise that I think Celtic deserve to win the league and be named champions.

“I know Celtic would prefer to play the rest of the games and to win the trophy, but that doesn’t look like it is going to be possible.

“As things stand, they are 13 points clear and Celtic DESERVE to win the league. 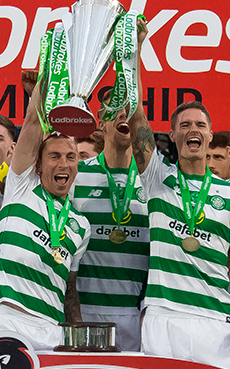 “There are going to be other teams who want the season to be null and void, but Celtic are well ahead and deserve to win.

“Hopefully, that will be the final decision and Celtic will be named as Scottish champions again.”

The title kings would prefer to play out the season, but if that doesn’t happen then boss Lennon believes they should be named worthy champions.

Lustig, who spent spent seven successful years in the east end of Glasgow, remarked: “It is good in Belgium we have a bit of closure.

“Everybody wanted it to be fair for everyone, but at the moment if they declare Celtic champions then the other side of Glasgow are going to say they didn’t deserve it and vice versa.

“It is going to be strange for everyone, but unless they somehow find a way to play the games to finish the season and find they can’t, then Celtic have to be named as champions.

“It would be different if they were only a couple of points in front of the team in second place, but we are talking about THIRTEEN points.

“There is no way even if the season resumed that Celtic would be caught over the remaining games.”

Lustig was part of second-placed Gent’s squad and has no complaints over the decision for the championship to be awarded elsewhere.

He added: “Club Brugge have been named champions. For us, we were second 15 points behind. My feeling is that is the fair thing to do.

“Every team in Belgium has played each other home away, apart from one team having one outstanding fixture, and I think most teams are happy to accept this outcome.”