The 29-year-old Turkish international striker has joined the champions from Feyenoord after a day of talks.
Kazim-Richards’ arrival follows Patrick Roberts’ 18-month loan move from Manchester City.
And, of course, the club also paid £2million for Danish centre-half Erik Sviatchenko last month.
Former Blackburn and Sheffield United player Kazim-Richards was recently suspended by the Dutch side for threatening a journalist and has only made 11 appearances this term.He is expected to provide 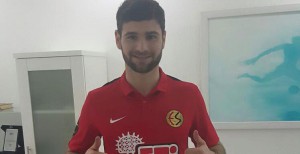 competition to strikers Leigh Griffiths and Carlton Cole with Nadir Çiftçi out the door having completed his loan move to Eskişehirspor after failing to impress at Celtic following his £1.3m move from Dundee United last summer.
The experienced London-born  Kazim-Richards has also played for Fenerbahce, Galatasaray and Bursaspor.
Celtic have a called a press conference for 8.15pm this evening to introduce the new striker. More to follow.