Celtic Quick News on News Now
You are at:Home»In Pictures»CELTIC v DONS: THE HAMPDEN STORY: 2016
By CQN Magazine on 14th April 2019 In Pictures

CELTIC became silverware centurians with their 100th success in a major trophy as they romped to a dazzling triumph over Aberdeen at Hampden.

The Dons arrived at the national stadium on a wave of positivity and optimism, but two first-half strikes from the Hoops dynamited the hopes of the Pittodrie outfit.

Only 16 minutes had gone before Tom Rogic neatly stepped inside a challenge from Graeme Shinnie and curled a delicate left-foot effort low beyond the stretching Joe Lewis.

With the game ticking towards the interval, James Forrest picked up a pass from Rogic and drove at the heart of the retreating Dons rearguard. The winger had only one thought on his mind and he completed a determined solo run with an unstoppable low drive that once again escaped the opposing keeper at his right-hand post.

It was all over when desperate defender Anthony O’Connor upended Forrest in the box in the 64th minute and Moussa Dembele made no mistake from the award as he sent Lewis the wrong way.

CQN’s ace lensmen were there to capture the action. Here is the pick of the pics. 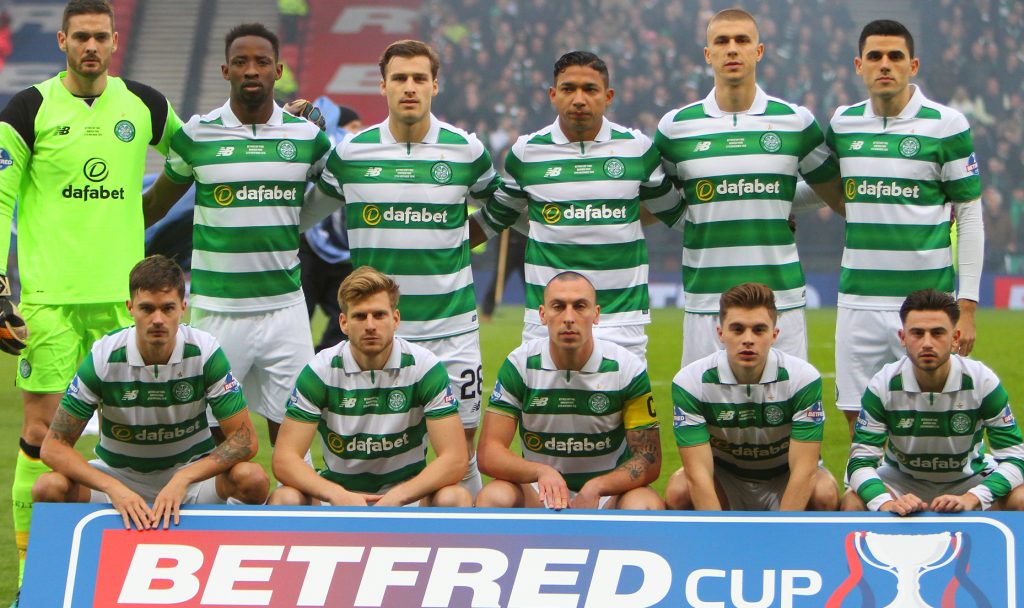 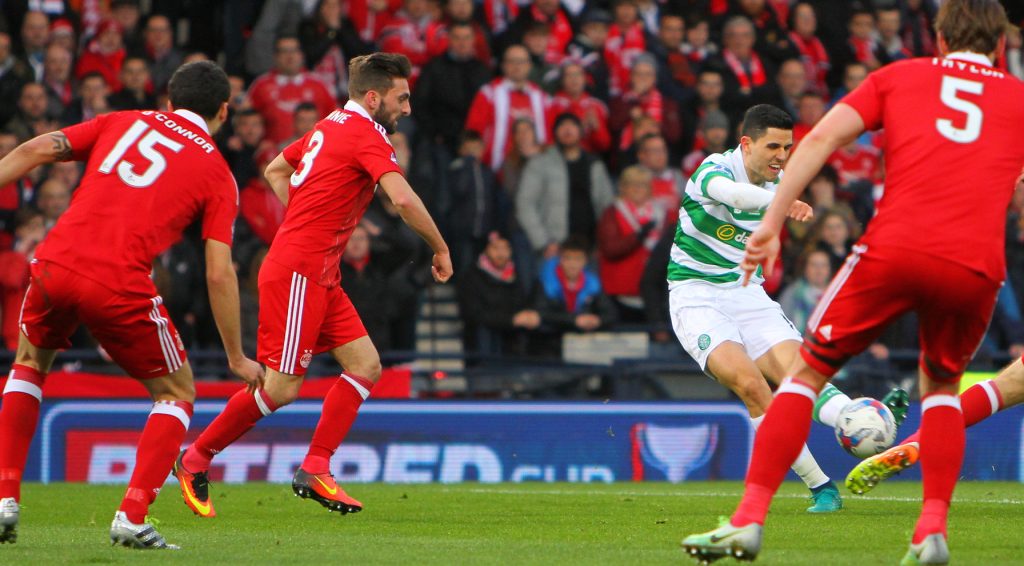 BY THE LEFT…Wizard of Oz Tom Rogic is surrounded by Dons defenders, but he still manages to produce a bit of magic as he opens the scoring. 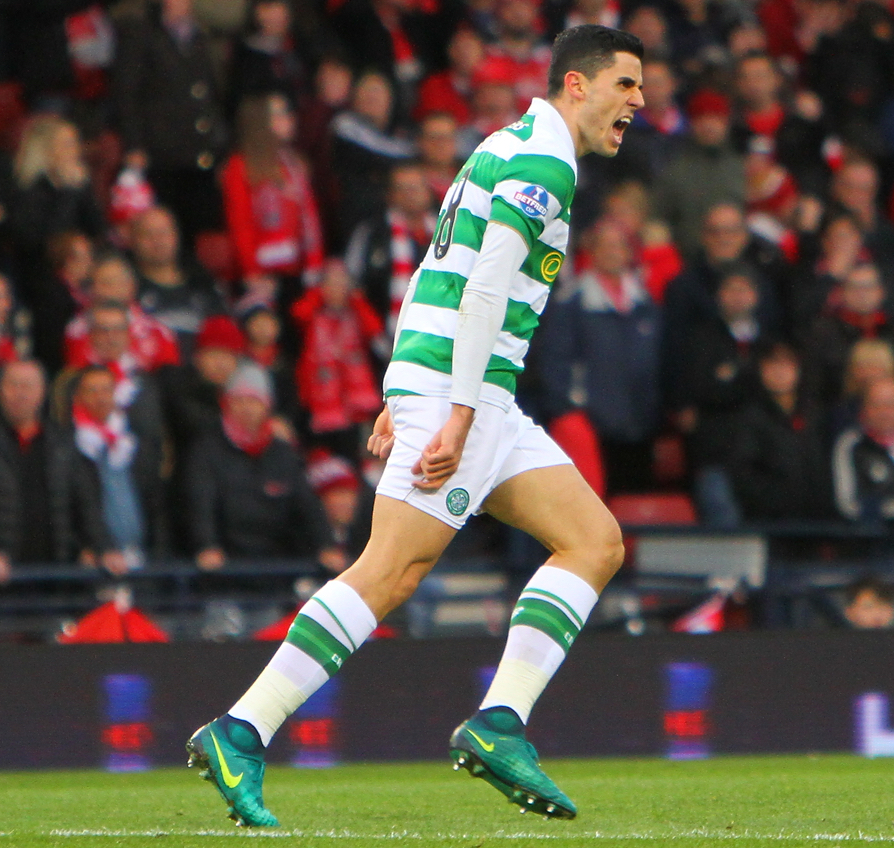 HAMPDEN ROAR…Tom Rogic races away in delight after claiming the opening strike. 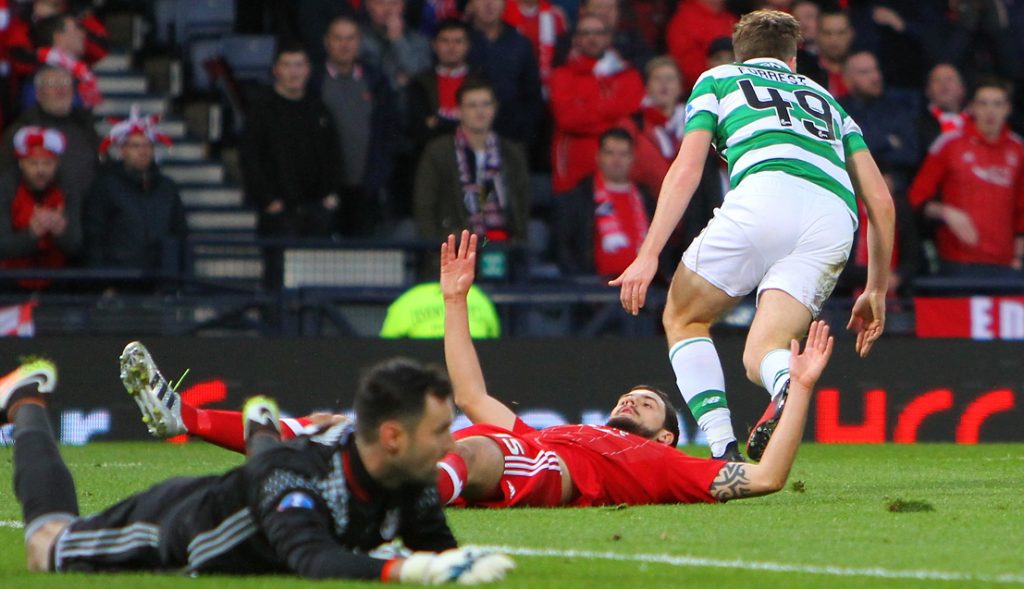 FLAT OUT…keeper Joe Lewis and defender Anthony O’Connor are beaten after James Forrest had struck with the second goal. 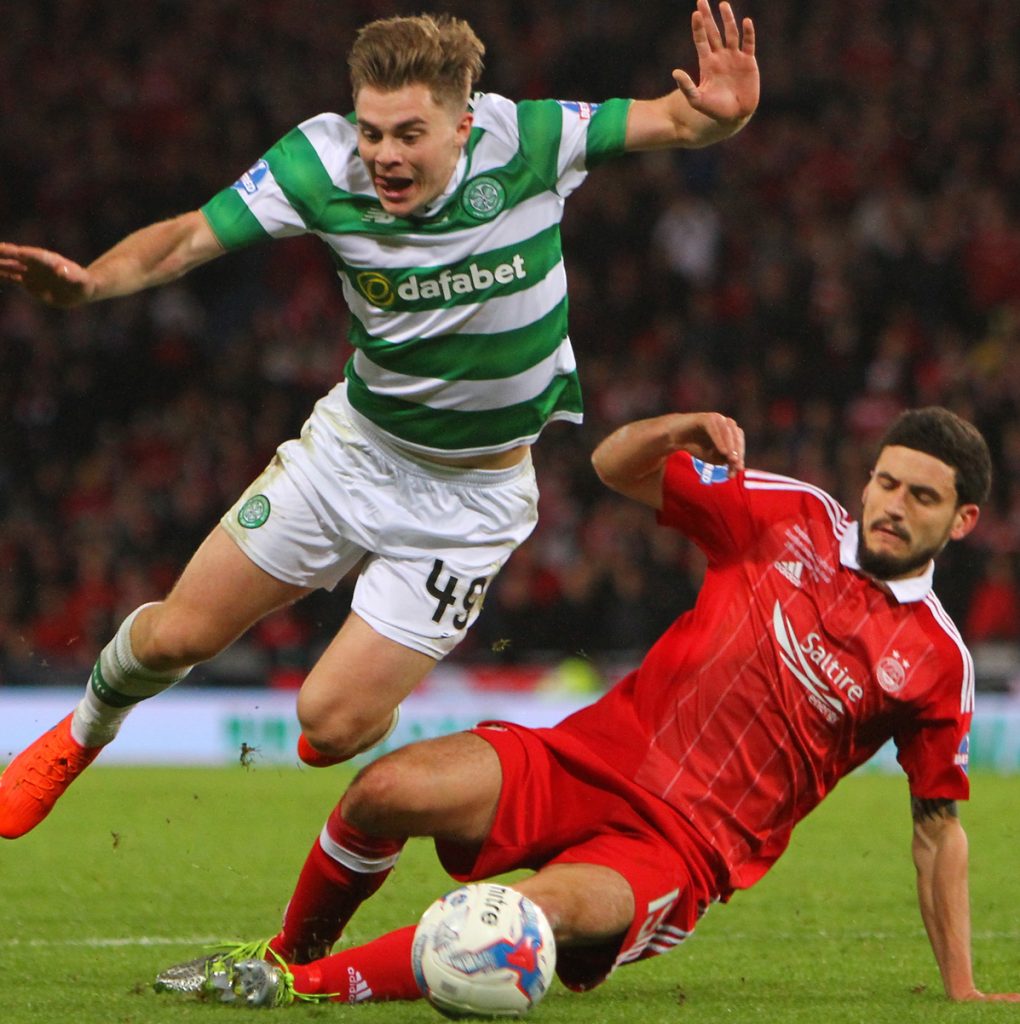 PENALTY…James Forrest is sent tumbling in the box following a wayward challenge from Anthony O’Connor. 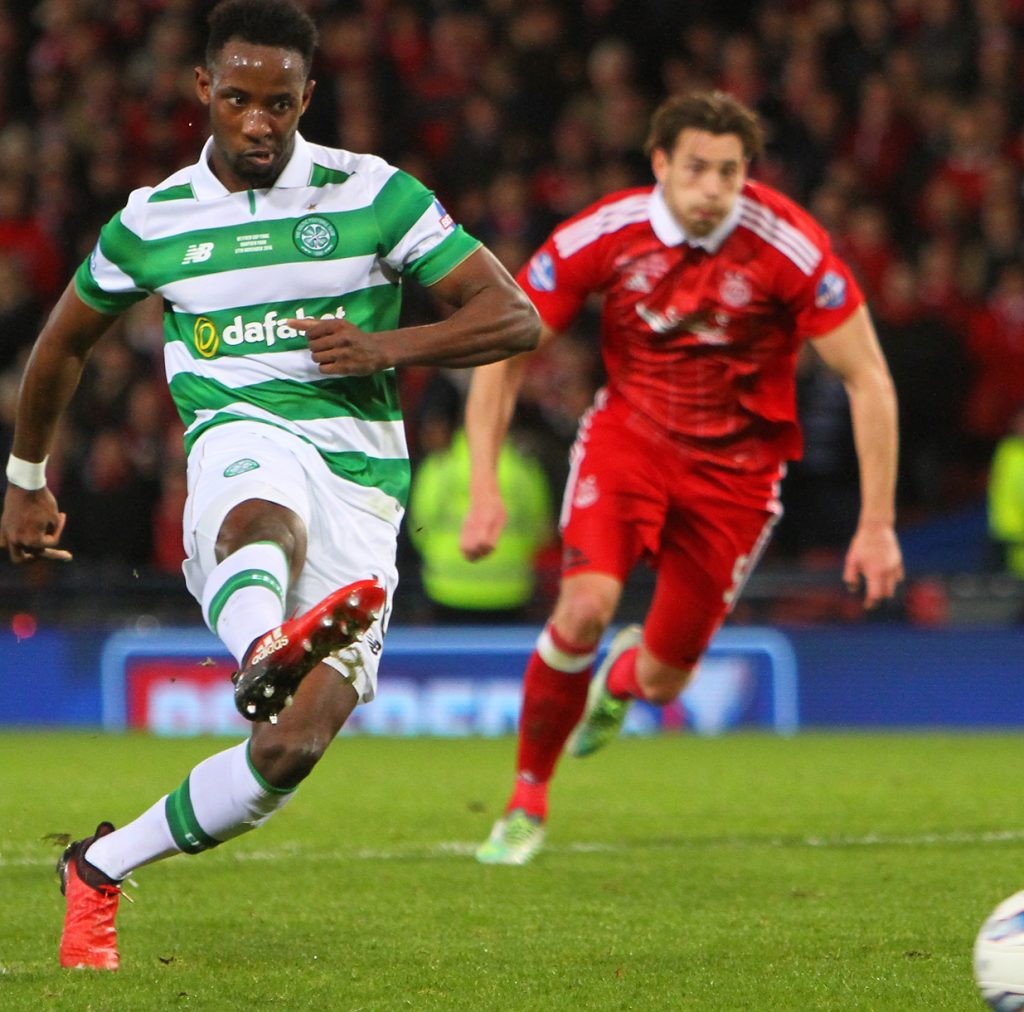 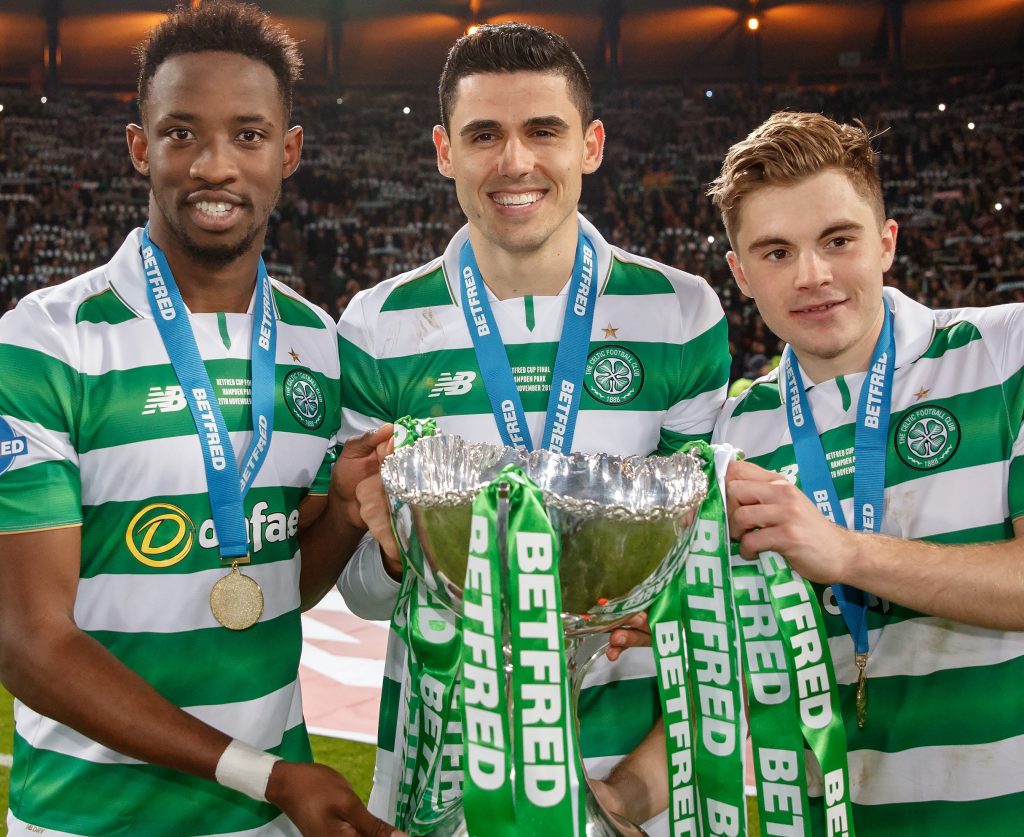 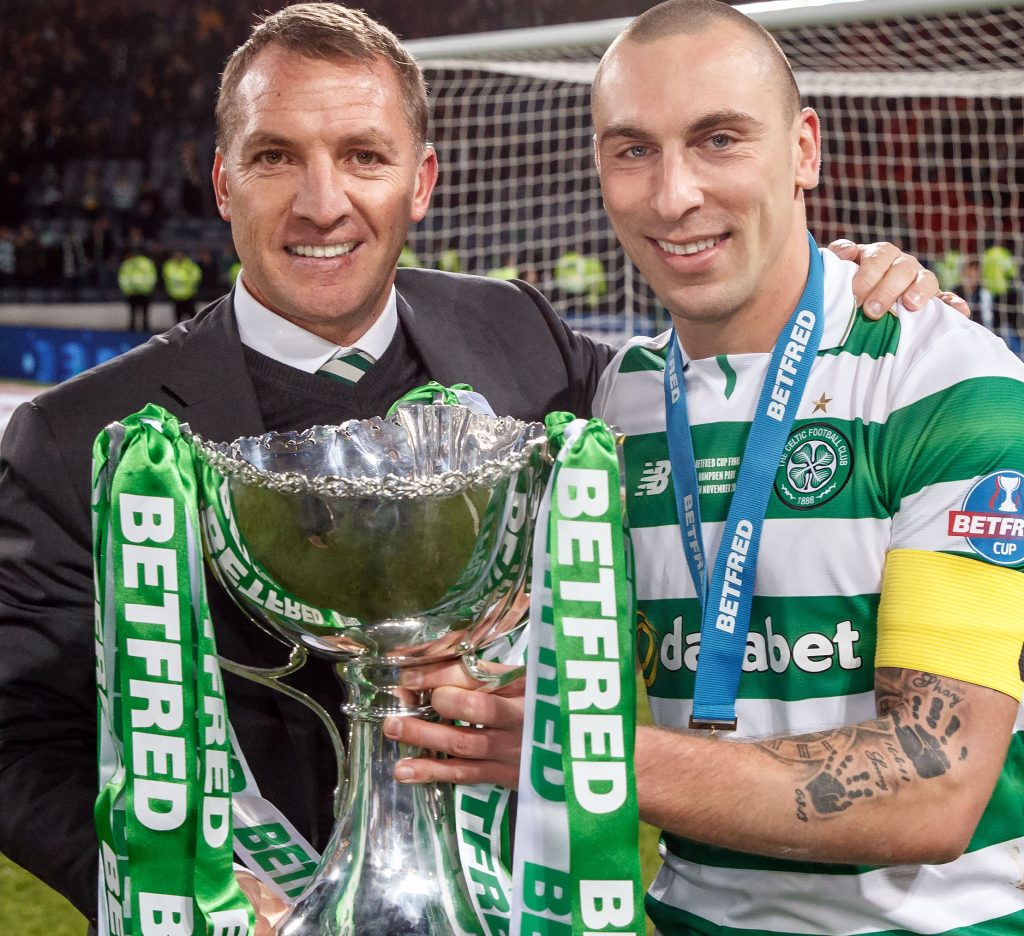 THE CUP THAT CHEERS…boss Brendan Rodgers and skipper Scott Brown with the trophy.

* DON’T miss the unbeatable match report and the best action images from Celtic v Aberdeen this afternoon – only in your champion CQN.