The right-back was involved in three of the Hoops’ goals in the 4-2 win over Dundee at Dens Park yesterday with Kyogo Furuhashi and Filipe Jota helping themselves to a double in another eye-catching performance.

After scoring the winner against Ferencvaros in th 3-2 Europa League Group G triumph in Budapest on Thursday night, Liel Abada fired blanks on this occasion. 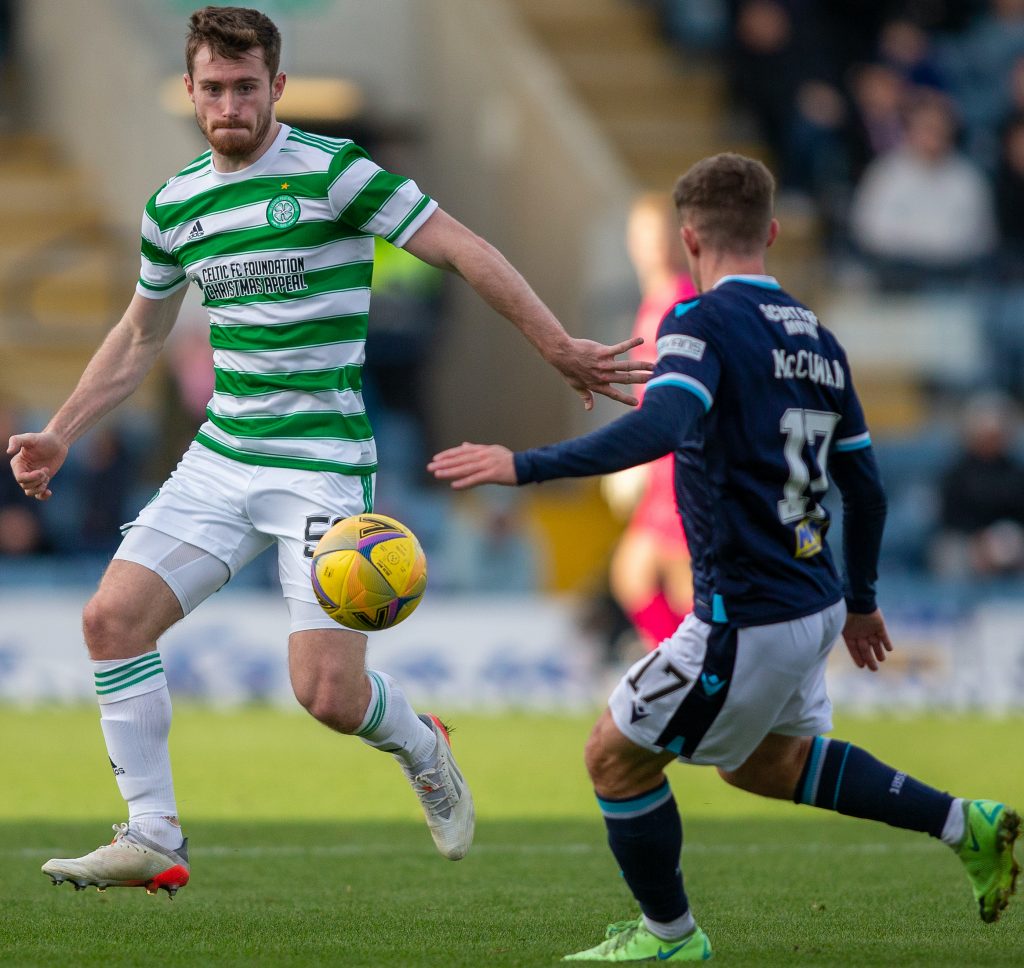 EYES ON THE BALL…Anthony Ralston is an image of concentration as he tussles with Dundee’s Luke McCowan.

But the Israel international winger was busy throughout and showed his usual flashes of excellence before Ange Postecoglou replaced him and Kyogo in the 71st minute with James Forrest and Giorgos Giakoumakis coming on in their place.

Ralston, who put in a tremendous individual display, was fortunate enough to get a close-up view of his team-mates sprinkling some stardust on Premiership proceedings on Tayside.

The powerhouse right-back said: “The movement of the boys up top is brilliant.

“With Kyogo, for his first goal, you always know he’s going to be in those dangerous areas and it’s just a case of me putting it in the right place for him.

“And then Jota came in at the back post for the next one. So, yes, the boys are brilliant with their movement and they’re all coming together well up there.

“They’re getting a bit of consistency together and that’s important. Their confidence is very high.

“In the away game against Ferencvaros then here against Dundee, their performances have been great. 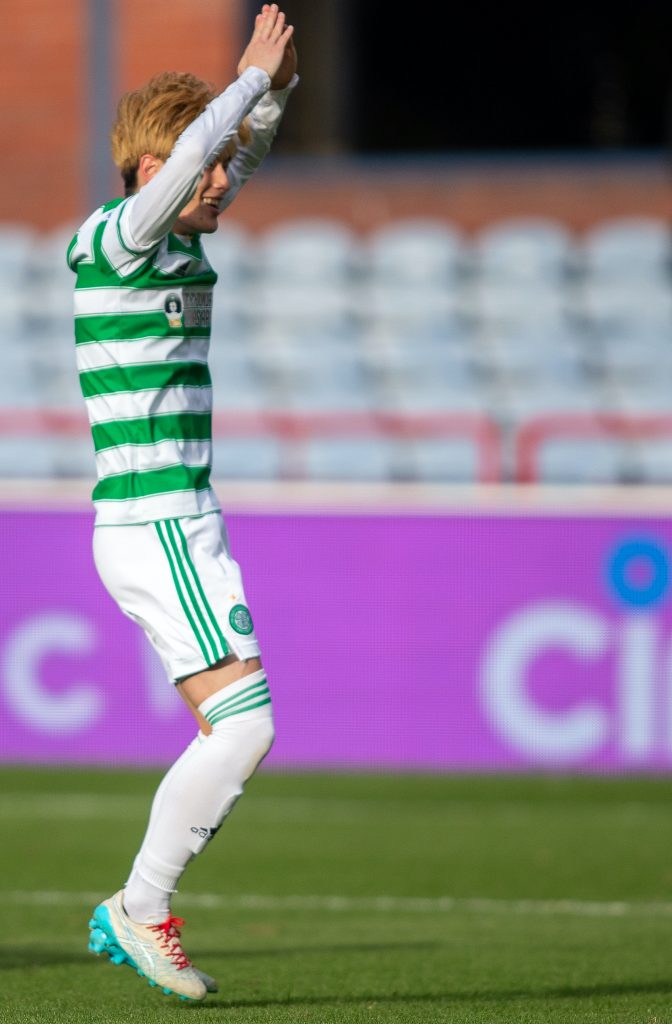 HANDS UP IF YOU’RE HAPPY…Kyogo Furuhashi celebrates his second goal at Dens Park.

“They’re right up with the best. You’ve seen for yourself what Kyogo’s been like since he came. He’s been top and it’s the same with Jota, too.

“It’s the professionalism they show and it’s the same for Liel Abada.

“They’re cracking boys. And those who came on later in the game also all carry their own threat. As a defensive unit it makes our job easier knowing we’ve got that quality up top. So, I’m happy for them all.”

Ralston, who signed a four-year extension during the week, continued: “I’m delighted to contribute to the team in a positive way.

“My job is to defend, but if I can help the team in any way in an attacking sense then I’m happy to do so.

“It’s something I’ve been working on at the training ground, my final ball and when I’m in that area to take my time and pick someone out. So, I’m happy I’ve been able to do that.

”We’re delighted with another win and to send the travelling fans home happy.”

However, the 22-year-old defender wasn’t totally satisfied with the display which allowed the Dens outfit to claim a couple of headers from left-wing crosses. 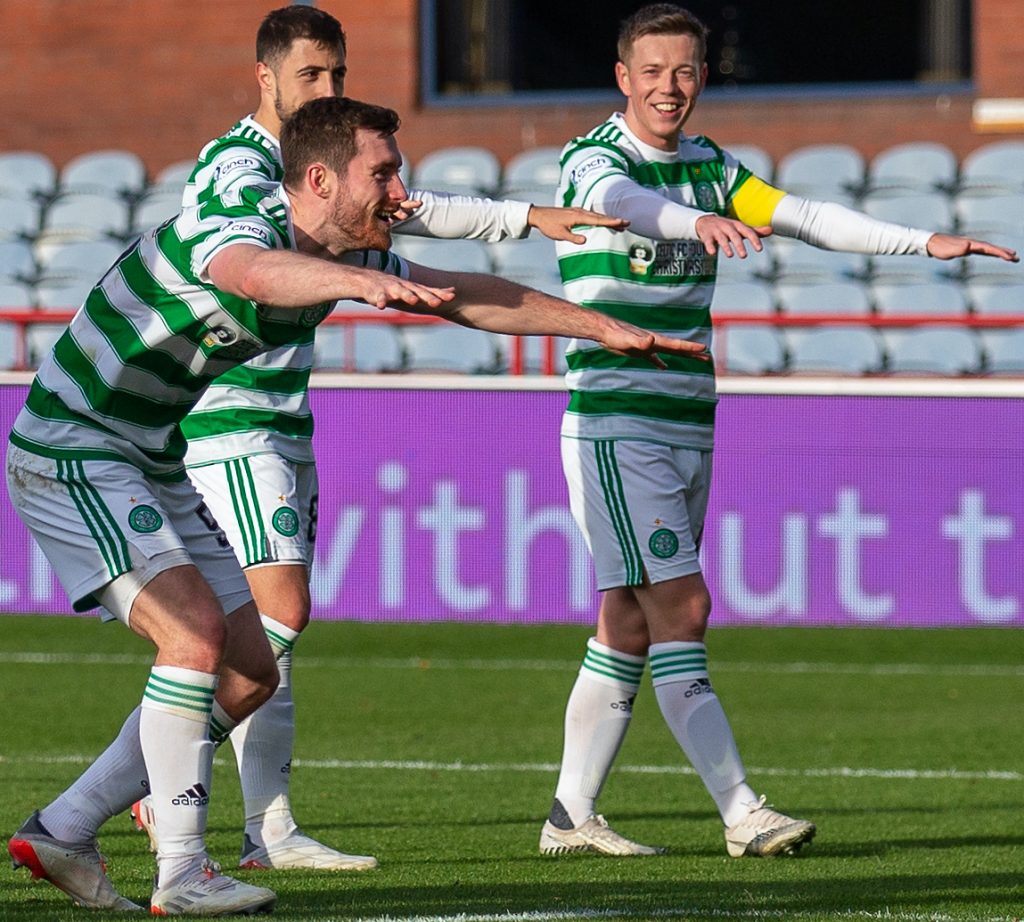 TAKE A BOW, LADS…Anthony Ralston, Josip Juranovic and Callum McGregor celebrate the 4-2 win in front of the travelling support.

Ralston, speaking to the Daily Record, added: “We’ve conceded two goals which we don’t want to be doing.

“As a team and as a defensive unit, we’ll analyse that and we’ll get that right, but it’s also important to focus on the positives, of which there are a lot just now. And we’re all happy.

“It’s a great group of boys and we’ve come together well. All the new boys have settled well and we’re in a good place.

“That’s the aim when you’re playing at the top level.

“We want to do well in Europe and dominate in the league and we’re on a good way to doing that.

“We’re in a good place and things are coming together well. We just need to keep going, get together again after the international break and keep this run going.