CQN last week highlighted the shameful front page story in the local East Anglian Daily News that called for the SACKING of the ex-Hoops hero.

Now Lambert and his squad have been caught up in a crazy scenario with the supporters interrupting their own team’s preparations for tonight’s English League One game against Northampton Town.

The struggling club, currently 12th in the table following the 2-1 loss at Peterborough, are now co-operating with a police investigation into the incident.

A group of raging followers, who have been protesting about poor results during Lambert’s reign, lobbed flares into the club’s training HQ, which the club say caught on a layer of mesh netting causing signs to catch fire.

Local police have launched an enquiry and Portman Road staff are co-operating fully with the authorities. 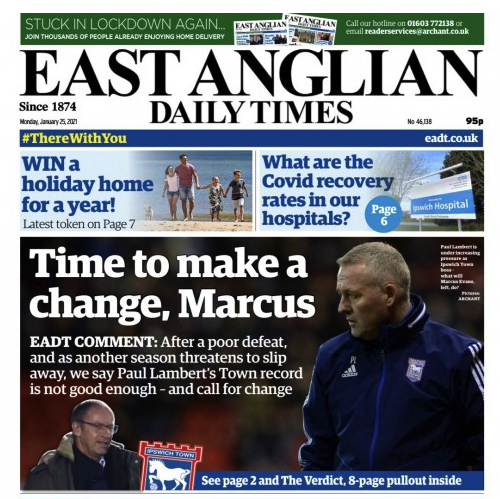 A club statement read: “There was an incident at the training ground this morning where flares were thrown over a perimeter fence adjacent to the players.

“The flares caused signage on the fence to catch alight and in doing so put our staff at risk. The police were called and are investigating the matter. The supporters’ group concerned have apologised for their actions.”

Lambert was signed by Wim Jansen from European champions Borussia Dortmund for £2million in November 1997 and played a key role in halting Rangers’ 10-in-a-row bid,

The stylish midfield operator was also pivotal in Martin O’Neill’s silverware clean sweep in the Irishman’s debut season in 2000/01 and was the captain who led the team to Seville in 2003.