MOUSSA DEMBELE is in line for a dramatic return to lead the Celtic attack in Tuesday’s Champions League return against AEK Athens.

It looked although the French striker had been ruled out of both legs against the Greek aces with a hamstring injury.

Dembele limped off during the 3-0 win over Alashkert in the second leg of the first round at Parkhead where he scored two goals.

The problem was more serious than originally diagnosed and he was also sidelined for both ties against Rosenborg and was sidelined for the midweek 1-1 stalemate against AEK.

However, boss Brendan Rodgers is contemplating starting him in the crucial encounter in the Olympic Stadium where the Hoops MUST score a goal if they hope to advance to the play-off stage.

The Irishman said: “We will see how it goes. The medical guys have always felt it was going to be a push. We also have to see how Moussa is feeling.

“You can’t put a timeline on these sort of things.

“He is working very hard out on the training field. We will see how he goes. You always have to weigh up the risk.

“They are going to be close. Kristoffer Ajer will miss the game through suspension. We will probably have a bit more experience back in the team.” 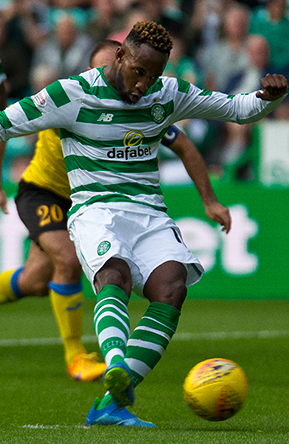 Belgian World Cup defender Dedryck Boyata is expected to get game time against Hearts at Tynecastle tomorrow and is set to replace the suspended Norwegian in Greece.

Rodgers will bolster his squad today with the arrival of Daniel Arzani,19, who made three substitute appearances for Australia in Russia, and old fans’ favourite Emilio Izaguirre.

The winger is ready to agree a two-year loan deal from Manchester City while the Honduran international defender is ready to pen a permanent contract to keep him at the club until 2020.

Rodgers said: “Daniel is an exciting player. He is a young talent who has come here to hopefully become a player over the next two years.”

The Parkhead gaffer also insisted 32-year-old Izaguirre, who left the club 13 months ago, can take the strain off Kieran Tierney.

He added: “Emilio had other options, but once I knew it was a possibility it was a sensible decision to get someone in like him who is fit and knows what Celtic is all about.

“It gives us that cover in a position where Kieran is clearly our No.1 full-back. To have him back allows young Calvin Miller to go on loan.”