DEVASTATED Moussa Dembele will miss BOTH of Celtic’s Championship third round qualifiers with AEK Athens.

The striker limped off after just over an hour in the 3-1 second leg win over Alashkert at Parkhead last month with a hamstring injury.

Brendan Rodgers hoped it was just a tight muscle strain and the French powerhouse would be back in time for the ties against Rosenborg.

Dembele, of course, sat out the 3-1 aggregate win over the Norwegians and he will be forced onto the sidelines for the crucial encounters against the Greek champions with the first leg due in Glasgow on Wednesday and the return in Athens the following Tuesday.

Discussing the setback, the Hoops boss admitted: “The medical guys are telling me that it is probably going to be the next two to three weeks, a bit longer than we had anticipated.”

Now Rodgers is hoping Leigh Griffiths can return from his thigh problem which has prevented him from making a competitive appearance this term. 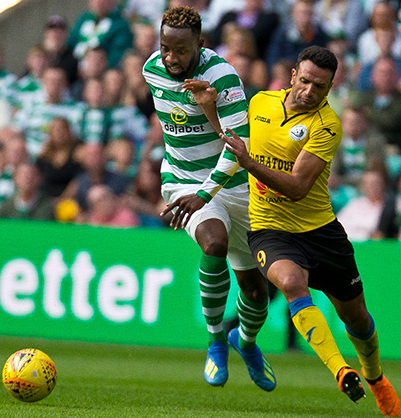 ON THE RUN…Moussa Dembele in action against Alashkert.

The Irishman said: “Leigh has been out for a while. He needs to get his fitness up. He has been working hard at trying to get that up. We have kept him behind to work on that side.

“The responsibility is always with the player. My job is very easy. I pick the players who are fit and fighting.

“Players have to take responsibility for their fitness and their willingness to make themselves available. For me, it’s pretty easy.”

Asked if Griffiths needed reminding of those responsibilities, Rodgers replied: “No, he knows. He sees me every day and all the squad in great physical condition.

“It’s the responsibility we put on them all.”