Celtic Quick News on News Now
You are at:Home»Football Matters»ENGLISH OPPONENTS IN EUROPE: ARSENAL 2009
By CQN Magazine on 19th September 2016 Football Matters
CELTIC’S first 16 competitive games against English clubs from 1966 to 2008 netted 7 wins, 5 draws and 4 defeats for the Bhoys.
In this CQN series has been looking back at Celtic’s English opponents in Europe and so far we have covered 16 competitive matches from the first encounter against Liverpool in 1966 through to the games against Man Utd in 2006 and again in 2008.
With the changes in format for European football, Celtic’s meeting with English sides were becoming much more regular so it was no surprise when in 2009 we were once again paired with opponents from South of the Border. Before we look at those games, here are links to the our features on the earlier 16  ties against English opposition.

CELTIC met English opposition again the following season and this time our opponents were Arsenal. Due to some careless errors, Celtic had failed to  clinch 4 consecutive SPLs and that meant Celtic facing the minefield of the qualifiers. Celtic had done well to overcome Russians, Dinamo Moskva in the previous qualifying round. The situation was ominous after Celtic went down 1-0 at home. However, an excellent performance in the away match saw Celtic win 2-0. 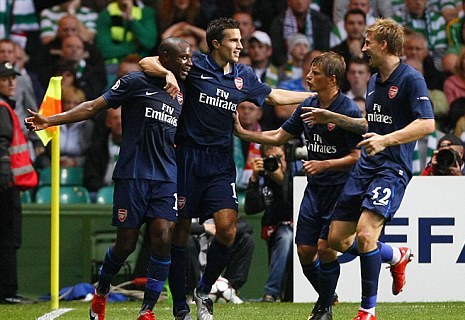 With the visit of Arsenal on August 18th, a much tougher task awaited Celtic. Arsenal had come into the game in good form. Just a few days earlier, they had beaten Everton 6-1 at Goodison Park and the same 11 started for the Gunners at Celtic Park.
A promising Celtic move early on was thwarted by Arsenal defender Thomas Vermaelen, who forced Scott Brown to skew his shot wide after McGeady had picked him out with an excellent pass. The game was being played at a frenetic pace. Both teams had good chances, but, as half time approached, there were still no goals.
Then Arsenal enjoyed a large slice of good fortune to take the lead. Fabregas’ 25 yard free kick appeared to  represent no threat. However, the ball deflected off Gallas’ back and spun into the bottom corner of the net, with Boruc wrong-footed. Gallas knew nothing about it but he had given the visitors an undeserved half time lead.
Early in the second half, Celtic had a very strong penalty claim turned down. Shaun Maloney’s free kick into the penalty area was diverted on to Bendtner’s arm but referee Massimo Busacca waved play on. On the hour mark, Celtic manager Tony Mowbray brought on strikers Scott McDonald and Marc-Antoine Fortune. Shortly after their introduction, the 2 substitutes combined well and only a desperate Gallas sliding tackle prevented an equaliser.
With 20 minutes remaining, Arsenal increased their lead and, again, they enjoyed good luck. A cross from Clichy was going nowhere until the ball diverted off Caldwell’s outstretched leg and past Boruc.
The game ended in a 2-0 defeat and when the teams lined up at The Emirates on August 26th, few gave Celtic much chance of making it through to the group stages. Celtic struggled early on and Eduardo came close with a follow up shot after Boruc had pulled off a good save from Bendnter.
Eduardo was central when Arsenal did score and, yet again, it was a ridiculously soft penalty. With a 2-0 lead from their away game and a huge financial advantage, the last thing Arsenal  required was assistance from referee Mejuto Gonzalez.
Eduardo was going round Boruc when he fell theatrically to the ground. It was never a penalty but the Spaniard pointed to the spot. Eduardo recovered quickly from his fall as he was able to take the penalty and score by sending Boruc the wrong way.
Shortly before half time, Scott McDonald looked to have given Celtic a lifeline. He turned a Fortune cross into the net but it was ruled offside. Eduardo and Bendtner came close before the break.
Celtic got off to a promising start in the second half. An ambitious Aiden McGeady shot from 25 yards went just wide. However, shortly after that Arsenal finished the match as a contest. Bendtner’s flick released Diaby who played the ball through to Eboue, who shot low past Boruc. Substitute Arshavin added a third soon after coming on.
Donati scored a consolation goal for Celtic with the last kick of the game.
Arsenal’s convincing win could be attributed to a combination of luck, poor refereeing and the huge financial gulf. It meant Celtic missed out on the wealth of the Champions’ League and were consigned to the Europa League.
So with 18 competitive games against English opponents, with the financial imbalance becoming more apparent with each new contest as the years go by, Celtic’s record from 1966 to 2009 netted 7 wins, 5 draws and 6 defeats. We’re still ahead of the game.
Written by Hugh Gallagher.
Click Here for Comments >
Share. Twitter Facebook Google+ Pinterest LinkedIn Tumblr Email
Previous ArticleJOZO SET TO START AGAINST ‘SAME OLD ALLOA’
Next Article ‘SLOEY’ BARTON’S REMARKABLE CLAIM DOESN’T STACK UP