OLIVER BURKE has pushed Celtic into the background as he prepares to kick on at West Brom.

The Scotland international attacker scored four goals in 19 appearances after joining the Hoops on loan from the Midlands outfit in January.

Burke’s all-action, up-and-at-’em style of play won him many admirers among the fans, including Lisbon Lion John Hughes, the club’s seventh-highest goalscorer in history, who told CQN readers in March his former club should splash the cash to keep the forward.

However, the pacy 22-year-old raider, who cost the Hawthorns side £15million when he joined from Bundesliga outfit RB Leipzig in the summer of 2017, dropped down the pecking order when Neil Lennon replaced Brendan Rodgers in February.

His last outing for the Hoops was the final Premiership game of the season against Hearts where he was replaced with Karamoko Dembele at the start of the second-half in the champions’ 2-1 win. 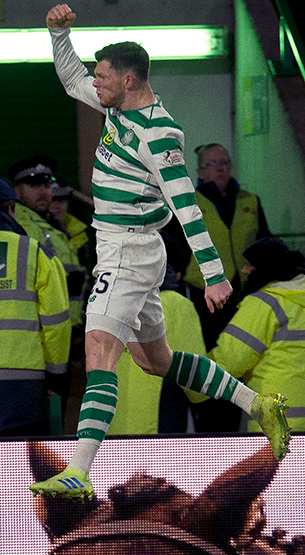 HOOPY DAYS…Oliver Burke celebrates his strike in the 2-0 win over Hibs in February.

Lennon overlooked him for his Scottish Cup Final squad a week later and then came a bizarre rant from the Baggies who claimed their player had received “unfair” treatment at the Glasgow side, a statement which was dismissed by Celtic and the manager.

Burke, who intimated he would have been happy to stay at Parkhead, has yet to have a say on the matter.

However, the Kirkcaldy-born frontman who still has three years to run on his current deal, wants to make an impact and impress new Head Coach Slaven Bilic.

Burke, speaking to the club’s media team, said: “I think it’s a great appointment and obviously he’s a fantastic manager, I think everyone knows that.

“The training sessions have been great. The quality and the standard has really risen and everybody’s really looking to impress and perform under him.

“Everyone knows they can learn a lot as he’s a good coach. For the young players coming through it’s important, even for me, to take everything in like a sponge.

“It’s perfect for me to learn as much as I can to really progress and give back to West Brom now.”