Celtic Quick News on News Now
You are at:Home»Latest News»FOLLOW THE LEADER: ‘MANAGER WILL BE PUTTING TOGETHER A GAME PLAN’
By CQN Magazine on 2nd April 2022 Latest News

ANGE POSTECOGLOU and his Celtic players are counting down the games as they focus on the club’s tenth title in 11 years.

The team travel across the city for the derby at Ibrox tomorrow in the knowledge a win will double their advantage to six points with only six matches to play, one of them at Parkhead following the split.

The manager has been plotting for each obstacle as it has come along and the encounter against Giovanni van Bronckhorst’s outfit will be treated exactly the same.

Callum McGregor understands the wisdom of the Greek-Australian gaffer and insists: “We have to approach it the same way as we’ve done throughout the season in every other game.

“Every game’s a big game at Celtic and, again, the next one is the biggest one, so we have to approach that with the same mindset.

ON THE MOVE…Callum McGregor is well prepared for tomorrow’s crucial encounter at Ibrox.

“The manager will be putting together a game plan the way he thinks the game should go and we’ve got to go and carry that out the same as we do every other week.

“So we just stay calm, we go there and give everything to try and get a positive result and we’ll see what happens come the end of the 90 minutes.”

McGregor, speaking on Celtic TV, continued: “Sunday’s a big game and, hopefully, we can get maximum points, which puts us in a great position obviously, with a few games remaining.

“We have to see what the task is, see how the game goes and then at the end of the 90 minutes, we’ll see where we are, but by no means is it going to define where the title goes.

“There’s still a lot of football to be played and you’ve got to win in all your other games as well, so if you go there and win but you don’t back that up with a win the following week, then you’ve not gained an advantage.

“Like I said, the manager will be asking us to give absolutely everything in the game and we’ll see where we’re at come the end of the game.”

The Hoops romped to a 3-0 win in the last clash of the Glasgow neighbours in February following a lightning start with a double from Reo Hatate and another from Liel Abada. 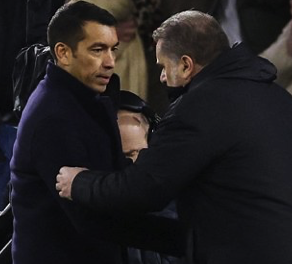 END GAME…Ange Postecoglou and Giovanni van Bronckhorst at the conclusion of Celtic’s 3-0 romp at Parkhead.

Giorgos Giakoumakis, who is likely to lead the line in the midday encounter in the absence of the injured Kyogo Furuhashi, could have had a first-half hat-trick but for the heroics of veteran keeper Allan McGregor.

McGregor added: “We need to try and strive to get the same level of performance. That’s what we try and do every game.

“The manager asks us: ‘Can we go and play the best game of the season today?’. And that’s what he’ll be asking us to do tomorrow.

“Of course, it was a positive result and a positive performance the last time we played, but every game is different. There are different challenges every time you go on the pitch and I’m sure that’ll be exactly the same tomorrow. as well.

“I’m really looking forward to it and it’ll be great to have our fans back in.

“It is a small number, a small pocket in the corner, but they’ll be giving everything, as will the players, so it’s just good to see that things are moving back in the right direction.

“But certainly for the players, it will be a boost to look up into the corner and see our own supporters.”