Celtic Quick News on News Now
You are at:Home»Latest News»‘FRENCH GIANTS TO BID FOR DEMBELE’
By CQN Magazine on 16th August 2018 Latest News

MARSEILLE are poised to test Celtic’s resolve with a cut-price £13.5million offer for Moussa Dembele, according to reports in France.

The Ligue 1 giants have switched their attention to the Hoops striker after a move for Nice’s controversial Italian frontman Mario Balotelli fell through.

Dembele, who was linked with the French outfit at the start of the year, appears to be back on their radar, despite his injury-hit start to the season at Parkhead.

The former French Under-21 attacker, who scored 32 goals in his first term at the Hoops after arriving in the summer of 2016 from Fulham, has seen his progress curtailed by a hamstring problem. 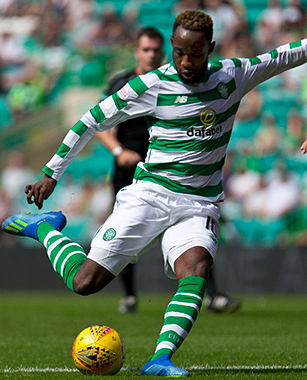 Dembele, 22, came on for the last 30 minutes of the Champions League qualifier against AEK Athens in the Olympic Stadium on Tuesday night, but couldn’t turn the tie in the Scottish champions’ favour as they went out 3-2 on aggregate.

The powerhouse raider claimed only 16 goals last term from 28 starts as he struggled to overcome his persistent injury.

Dembele is under contract until June 2020 and Celtic are unlikely to be interested in doing business at £13.5million for a player who was valued at twice that amount in his debut campaign.