Celtic Quick News on News Now
You are at:Home»Latest News»GRIFF ‘HAS TO TAKE A LONG LOOK AT HIMSELF,’ HOOPS LEGEND
By CQN Magazine on 16th June 2019 Latest News

The striker claimed a paltry six goals last season and didn’t make a solitary appearance in 2019 due to well-publicised personal issues.

Collins, during his two-year stint as assistant manager to Ronny Deila, worked on a one-on-one basis with the striker when he was a coach at Parkhead.

In 2015/16, under the guidance of the former Hoops midfielder and the Norwegian boss, Griffiths enjoyed a sensational 40-goal campaign and the ex-Scotland World Cup star is disappointed to see the 28-year-old frontman not making the most of his ability.

Collins, speaking to the Sunday Mail, said: “You have to feel for Leigh and hope he can get himself back on track.

“When he’s fit and healthy, he’s a threat. He’s a quality striker. I’ve seen him smashing goals in from all angles with that left foot.

“So, hopefully, he can put his troubles and injuries behind him and get back to his best.

“I had no problems working with Leigh. I used to be out most days after training with him to work on finishing.

“When myself and Ronny were there, he had the most successful season of his career, 40 goals.

“It was a good time for him and he has to take the credit himself. 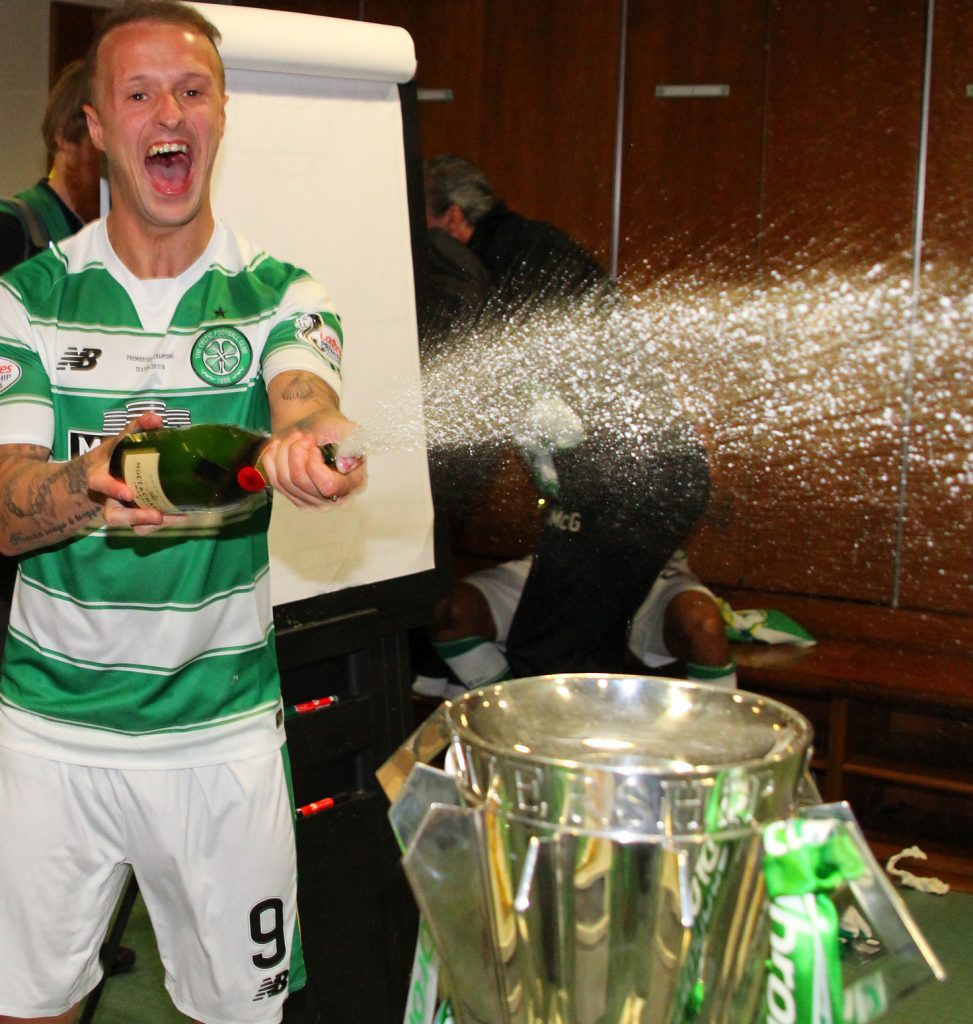 THAT CHAMPAGNE FEELING…Leigh Griffiths celebrates the 2016 title success after scoring 40 goals in a prolific season.

“He got himself fit and sharp and, when he’s like that, he’ll score goals in any company. He needed to be told the truth and sometimes it hurt. Other times he needed a cuddle.

“Most players understand that to stay at the highest level it takes sacrifice. It takes dedication to get the rewards.

“If you take your foot off the gas and you’re not professional – be it eating, drinking, sleeping or training properly – that’s when the problems start.

“You can be the best player in the world, but if you don’t have your fitness you won’t perform.

“You need to take care of yourself and that’s not just exclusive to Leigh.

“The boy has a lot of talent. The hardest thing in football is to score goals and he knows how to do it.

“But he has to learn that you need to be dedicated to playing 50 or 60 games a season.

“And for the last few years he hasn’t been able to do that.

“So, he has to take a long look at himself in the mirror and ask the question.”

Ironically, the popular attacker claimed his 100th goal for the champions during his troubled season when he swept in a trademark-free-kick in the 3-0 triumph over FK Suduva in the Europa League qualifier at Parkhead on August 30.

However, he struck his sixth – and final – effort with another deadball finish in the 3-0 win at Hamilton Accies on November 24.