The Hoops hero was astonished to see the Japanese ace replicate his goal celebration when he netted twice in Ange Postecoglou’s 3-0 win over Giovanni van Bronckhorst’s outfit at Parkhead in February.

The player had just arrived in Hogmanay along with Daizen Maeda and Yosuke Ideguchi as part of the Greek-Australian’s triple swoop on the J-League to bolster his squad for the second half of his debut campaign in charge.

And, just like the little Slovakian maestro, Hatate scored a double against the Glasgow foes. 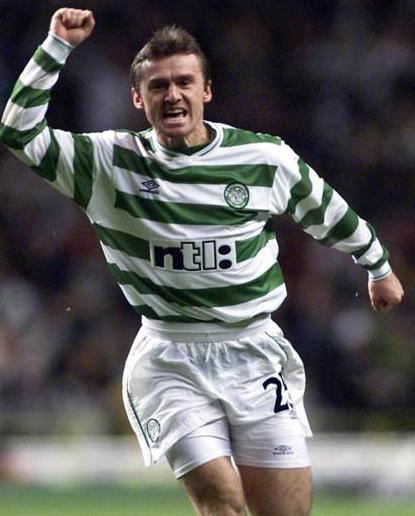 GOAL-DEN BHOY…Reo Hatate jumps for joy after netting for the Hoops.

Moravcik, of course, achieved the feat 24 years ago when he rifled the opener beyond Rangers keeper Antti Niemi as Josef Venglos’ men soared to a 5-1 triumph in the east end of Glasgow. And, just for good measure, he added a second after the interval.

Henrik Larsson, with a double, and Mark Burchill claimed the others as Dick Advocaat’s side were shredded during a derby demolition.

Maeda, making his first appearance against the Govan visitors, netted the first two goals during the 3-0 romp and even set up the third for Liel Abada just before the interval.

Moravcik said: “When Hatate did what he did I was jealous. It was similar to me!

“The celebration was the same. Maybe he saw my video!”

Lubo, speaking to the Scottish Sun, added: “Mine was over 20 years ago and it was fantastic to see it happen again.

“I was happy for him because it’s not easy to come from France to Scotland, as I did. But it’s not far. Japan to Scotland is far.”

No doubt Hatate will be hoping to stage another action replay against the same opponents at Hampden on Sunday.