Celtic Quick News on News Now
You are at:Home»Lions & Legends»‘HOOPS, STARS AND STRIPES,’ ON THE ROAD WITH ANDY LYNCH – EPISODE 1
By CQN Magazine on 23rd September 2016 Lions & Legends
CELTIC author Paul John Dykes speaks to ex-Celtic captain, Andy Lynch, about his forthcoming autobiography, ‘Hoops, Stars & Stripes’.
In episode 1 of this exclusive CQN webcast, ‘On The Road’, Andy reminisces about his early days in junior football, and how it was Hearts who finally signed him on professional forms in 1969.
A first-team berth was quickly established at Tynecastle, as Andy flourished on the left-wing under the tutelage of Hearts’ Head Coach, Jock Wallace. 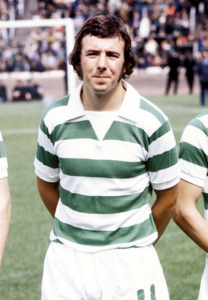 Andy speaks fondly of his time in the capital, but his heart was always set on a move to Celtic Park. After starring against many of Jock Stein’s Lisbon Lions, newspaper reports began to report that he may soon end up as one of their team-mates.
When the move finally came, Andy was thrilled to put pen-to-paper on a £35,000 transfer in February 1973, and he was welcomed to the team of his dreams by many of his Celtic heroes.
Finally, Andy recalls how his transfer almost turned into a nightmare due to recurring injury problems, and he reveals the unsung Celtic hero who decided to move him into defence to fill the left-back spot in the reserves.
This change of position revitalised Andy’s career, and he went on to establish himself as an integral part of Celtic’s first-team for the remainder of the 1970s.
Join Andy Lynch in this exclusive three-part CQN webcast, where he takes a walk down memory lane in advance of the release of his autobiography, ‘Hoops, Stars & Stripes’, which is released by CQN Books in October 2016.
On the Road with Andy Lynch Part 1 is displayed below. Part 2 will be posted next Friday.