NEIL LENNON sifted through the wreckage of Celtic’s fourth failed Champions League campaign in six years and admitted he is EXCITED about this team.

Parkhead was stunned on Tuesday night when the Romanians of Cluj thumped four efforts behind Scott Bain on their way to a remarkable 4-3 victory to send the Hoops hurling out of Europe’s elite competition on a 5-4 aggregate.

The wretched result wasn’t in the script after the first leg stalemate, but dogged, determined opponents scored with practically every shot on target and that was enough to propel Lennon’s men through the exit.

The Irishman followed Brendan Rodgers from the previous campaign as an also-ran among the big boys after last term’s 3-2 collapse against mediocre AEK Athens..

Add that to the two nosedives during Ronny Deila’s brief reign and the frustration of the support is understandable.

However, Lennon is remaining positive as he prepares his team for the League Cup-tie against Dunfermline in the east end of Glasgow this afternoon. 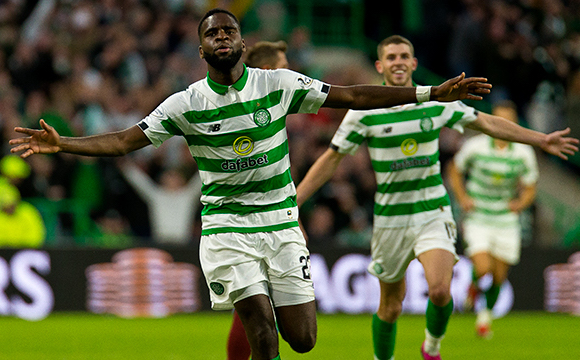 CHEERS…Odsonne Edouard shows his delight after the second goal. 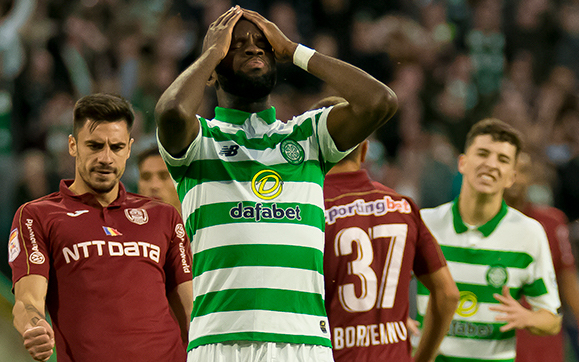 Looking at a side that has scored 28 goals in eight games since the season’s kick-off, the Parkhead gaffer, speaking to the Evening Times, said: “I am excited about this team, despite losing to Cluj. Domestically, it’s certainly the best start I have ever made as a manager.

“Albeit it’s only two games, but we had also been very good in the European games. We just had one bad half of football and it’s cost us. We need to analyse it and look at where we went on and improve on it.

“There are fine lines. Everything in football can flip very quickly. Things can be going well and it can go the other way. Obviously, we’ve had the two days of hysteria and vitriol, which you have to accept.

“But there has to be a sense of perspective. When we were winning 7-0 and 5-2, I wasn’t saying this is a greatest team in the world. I was happy, but not too happy. Now we are out of the Champions League, it’s a huge body blow, but you can’t let it fester.

“We have to move forward to the other competitions we are involved in. While you may be down and feeling sorry for ourselves for a couple of days, there is a lot still to aim for I am excited about this team.

“There’s real talent. For half-an-hour on Tuesday some of the football was breathtaking.” 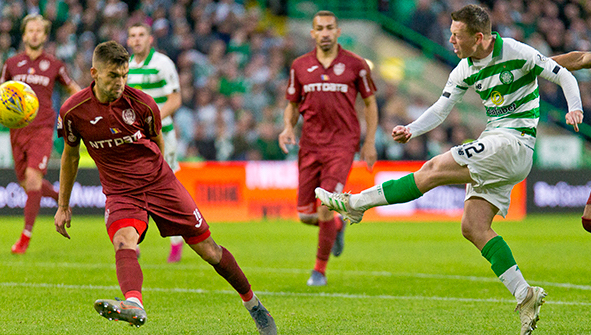 GOING CLOSE…Callum McGregor fires a shot at the Cluj goal. 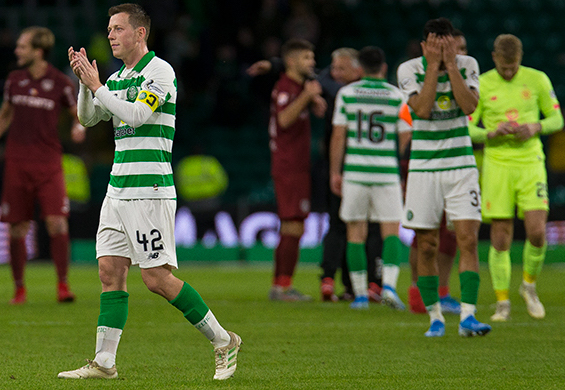 GOING OUT…Callum McGregor and his team-mates after the shock exit.

Despite that period of domination, Dan Petrescu’s Romanian upstarts still managed to hit three second-half goals after some truly awful and naive defending and that has sparked criticism following an unacceptable loss.

Lennon added: “Yeah, you expect it. There is a little bit more hysteria these days. You have to keep a level head and a sense of perspective. The analysis of the game is that we didn’t play well in the first-half and then we were outstanding in the second-half.

“We got ourselves in the lead twice and then just gave Cluj oxygen – particularly at 2-1 when we were pretty rampant. So, we have to marry the two halves together more.

“I think we have the makings of a very good team here. Up until Tuesday, we were all delighted with the start we had made.

“This is a setback – we have to lick our wounds, come back and keep improving. Because we still have a bit to do.”

* DON’T miss the unbeatable match report from Celtic v Dunfermline this afternoon – only in your champion CQN.