BAYERN MUNICH and their supporters were simply blown away by the tremendous Celtic support that descended upon the Bavarian capital this week.

Over 10,000 strong the support were, as usual, a real credit to Celtic. Friendly, amusing, loud and proud (even when the scoreline was awful), they sang on in defiance and with pride in their club, all this to the amazement of the good folk of Munich.

One even reckoned that Celtic fans should enter the Euro Vision Song Contest!

Certainly the tribute to the Lisbon Lions from the 67th to around the 70th minute was extra special. 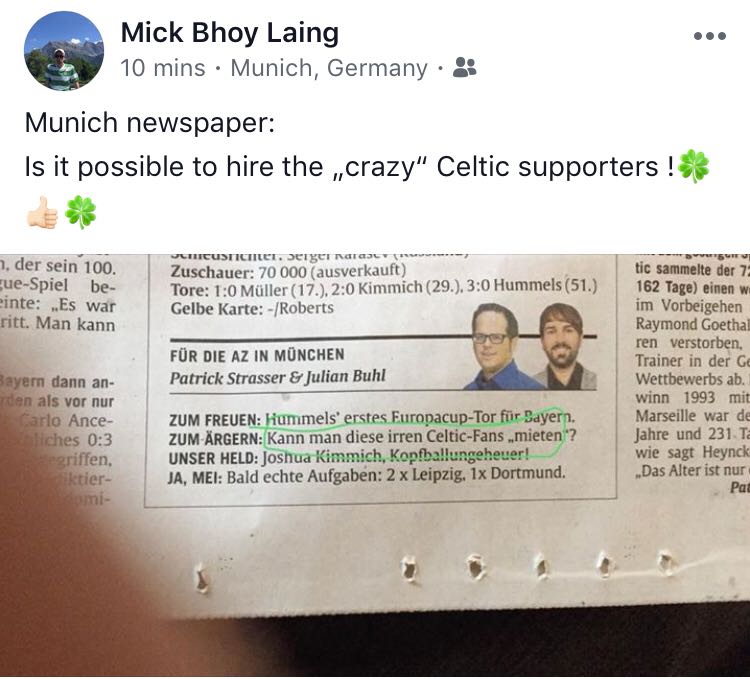 Thanks for making it a fantastic atmosphere, Bhoys!

Wishing everyone connected with @celticfc a safe journey home

See you in Glasgow https://t.co/ZK26DLKP3m

Meanwhile there was a chap on twitter yesterday, actually calling himself a Nazi, who was widely quoted in the zombie forums. He was claiming that Celtic fans at Manchester Airport were singing songs supporting Isis as they made their way to Munich. This story was picked up today by The Sun newspaper, who revised the claim to singing about the IRA.

It reminded us of their own fans in Manchester. We’ll spare you the sight of the tweet from The Sun.

to the traveling @celticfc fans, we’ll see you back in Glasgow! #FCBCEL pic.twitter.com/FMEVouQSLw