Celtic Quick News on News Now
You are at:Home»Latest News»‘IT HAS BEEN A LONG PATH,’ CHRISTIE
By CQN Magazine on 8th November 2018 Latest News

RYAN CHRISTIE has admitted his frustration about being the odd man out when Celtic visited Tynecastle in the second Premiership encounter of the season.

The midfielder was omitted from Brendan Rodgers’ squad that was stripped for action with Jonny Hayes and Eboue Kouassi getting the nod to start against Hearts.

Christie watched from the sidelines as a much-changed Hoops line-up lost 1-0 to Craig Levein’s side.

Two months later, the Highlander returned to Edinburgh to face Hearts and stole the show with a superb second-half performance after coming on for the injured Olivier Ntcham at the interval.

He scored a magnificent killer third goal and was involved in the other two as the Parkhead men romped to a 3-0 Betfred League Cup semi-final success at Murrayfield.

Christie kept his place in the team and scored again in the 5-0 rout of Dundee at Dens Park and there was another five-star performance from the 23-year-old playmaker in the 5-0 stroll against Levein’s team on Saturday.

Gaffer Rodgers is now determined to persuade the Scotland international to agree an extension to his current contract which expires at the end of the campaign.

The smooth operator reflected on the ill-facted afternoon in August as he said: “It was probably right at the start of the season. We played a few European qualifiers, then Hearts and I was in the stand and for a few games after that. It was hard to see a pathway for me then.

“I was obviously coming back from Aberdeen where I was playing most weeks. 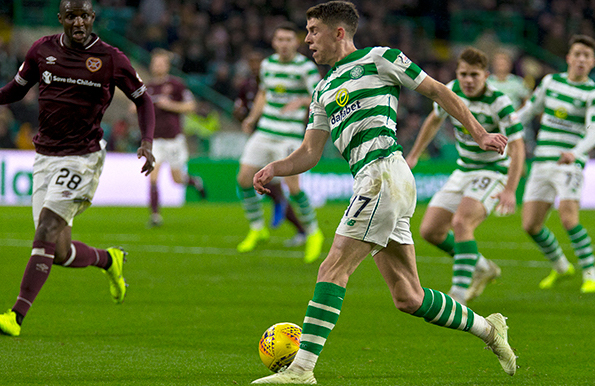 CAPITAL PUNISHMENT…Ryan Christie puts Hearts under pressure in the 5-0 mauling at the weekend.

“I found it so much harder to adjust to not even being on the bench, so it was a frustrating time, but if anything that spurs you on to keep your head down and work harder.

“You just hope it pays dividends. I’d said to myself that I would only look at other options when I was told my time was up at Celtic.

“Until I was told otherwise, I’d decided to keep pushing. It has been a long path and it has needed plenty of patience. No players like sitting in the stands or not getting on the park.

“There have been frustrating times. But, as a whole, I felt I always had a chance, especially after coming back last season. There was a lot of talk about me maybe moving on, but I always thought I would have a chance and an opportunity would open up.”

Christie continued: “I had bits and pieces until recently, but coming on in the Betfred Cup semi-final and getting a run of games and scoring then it’s nice to make that contribution.

“You need to chip in with goals and assists at this club.

“I think it amplified the fact that any game-time I had, I had to make a real impact.

“That’s what I’ve been missing up until now – I was coming on, but not scoring or assisting.

“When you change a game you take a bit of confidence from it and, hopefully, I can find a bit of momentum.

“Obviously, it has been good to get a run of games. It is up to me to push on, keep making and impact and contribute to the team.”

Christie, who is in line for a starting place in tonight’s crucial Europa League Group B match against RB Leipzig at Parkhead, added: “There’s always a pressure at this club to get results.

“Our aim at the start of this season was to have European football after Christmas.

“We realise what we need to do. We need to win and then asses the fixtures that are coming up.

“I don’t think there’s any added pressure. We’re playing at home and we take great confidence from that.”