The loss was a costly one for the club – around £40million is up for grabs for the Champions League group stages this season – and it could also open the door for a Parkhead exit for the French striker.

Edouard put in another lacklustre display against the Danes which matched his performance in the first leg last week when he passed up a superb opportunity to make it 2-0 before Vaslis Barkas presented the opposition with the equaliser.

Brighton are likely to step up their pursuit of the 23-year-old frontman within the next 48 hours with their England international defender Ben White edging closer to his £50million switch to Arsenal. The player has been seen at the London club’s training ground as they prepare to finalise the signing that has been running all summer. 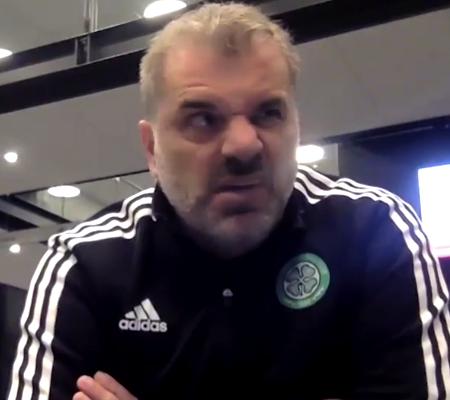 CHAMPIONS LEAGUE AFTERMATH…Ange Postecoglou discuses the loss with the media.

Edouard is likely to cost a down-payment of £18.5million with the Hoops picking up an extra £3.5million in add-ons. His former club, Paris Saint-Germain, are due 40 per cent of the profits after selling the prospect to Celtic for £9million in the summer of 2018.

The flamboyant former French Under-21 international failed to impress on what could be his last outing in the green and white hoops, but Ange Postecoglou defended the forward.

The manager, speaking to the Daily Mail, said: “He worked awfully hard and gave everything he could. It wasn’t an easy night for him.

“We knew that he would have to lead the line for us a little bit.

“I’m really disappointed and, at the moment, I would rather analyse the game rather than look at each player’s individual performance.”

Edouard is at his most prolific when he has a partner in attack, but Leigh Griffiths was left at home following an injury in training while £5million Swiss attacker Albian Ajeti, scorer of six goals in his debut season, has failed to impress the new boss.

So, Celtic’s record transfer purchase was forced to fly solo against the Danes which clearly does not suit his ideals.

Edouard may be gone by the time £4.6million Japanese marksman Kyogo Furuhashi is ready to make his first appearance.