CHRISTOPHER JULLIEN is poised to make his Celtic debut in the friendly against Rennes at Parkhead tomorrow afternoon.

And the 6ft 5in centre-half, bought from Toulouse for £7million at the of last month, has revealed he is looking forward to the challenge of his first appearance for the eight-in-a-row champions.

Jullien, the most expensive defender in Hoops’ history, told the club website: “I think Celtic fans are going to expect a lot from me because last year this team won everything, so you need to perform to a high standard and I hope to do that

“That’s an exciting challenge for me. I know the team has great spirit and is very close.

“That’s a good kind of pressure to come in to and I can’t wait to take that on. I’m going to give everything to make my family, the fans and my team-mates happy and proud of me.

“I hope we can repeat what we did last year and add the Champions League to that.”

The 26-year-old Frenchman is well aware of what to expect from his countrymen whom he faced in Ligue 1 last term. 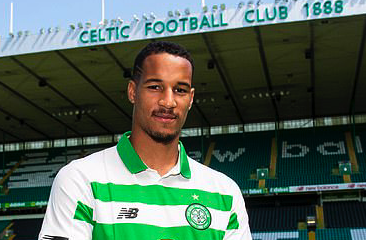 PARADISE…Christopher Jullien is poised for his debut.

He added: “They have some good defenders, so they will be very difficult to break down. They are still a strong team now and they will strengthen this summer with some transfers.

“They’re going to keep the same mentality because their manager, Julien Stephan, came in halfway through last season and he brought a powerful mind-set. He did some good things with the team and they got some impressive results.

“They beat Arsenal in the Europa League, and then PSG in the Cup Final so they will be a confident team. The manager’s attitude is to never give up and that has rubbed off on the players.

“This will be a great test for us and it will make for a great game.”

Instead, the Irishman paired Nir Bitton with Jozo Simunovic and kept his big-money signing on the substitutes’ bench during the 3-1 triumph.

However, Jullien, assuming he comes through tomorrow without a hitch, is likely to take his competitive bow in Wednesday’s return leg.