PETER LAWWELL, who stepped down as Celtic chief executive on June 30 last year, has emerged as the leading candidate to take over from Ian Bankier as club chairman.

The 63-year-old, who spent 17 seasons in his previous post at Parkhead, is expected to return in the supremo role in January 2023.

Bankier, 70, will retire from the position after 11 years at the club at the end of December, as CQN reported earlier today.

He is calling time on his stewardship after succeeding John Reid as the club’s chairman in 2011. 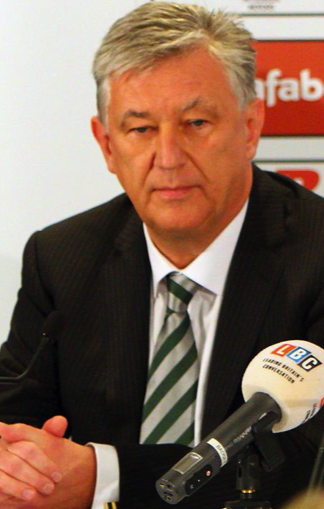 QUICKFIRE RETURN…Peter Lawwell could be on his way back to Celtic.

Lawwell is the frontrunner for a return to the champions, according to a report in the Daily Mail.

His last action as CEO was to bring in Ange Postecoglou as manager following Neil Lennon’s departure in February last year.

John Kennedy was in interim charge for the remaining 10 games of the Hoops’ first trophyless season in 11 years while the club pursued Eddie Howe as their new manager.

However, following three months of uncertainty, Lawwell called time on the chase for the former Bournemouth gaffer and directed his energies into bringing the Greek-Australian from Yokohama F Marinos.

Postecoglou was appointed on June 10 – just 20 days before Lawwell vacated the position.

Now it looks as though he will be back at Parkhead as the main man.