The Celtic will have to pick up the pieces immediately and make certain the 4-3 aggregate defeat does not derail his squad at a crucial stage of the campaign.

Former manager and player Hay, now a club ambassador, watched from the stand as the drama unfolded at Parkhead on Tuesday night.

The club icon, speaking to the Evening Times, said: “Neil Lennon’s job now is to make sure this doesn’t demoralise his players. A home game against Dunfermline in the Betfred Cup isn’t the worst way to follow up such a bad evening.

“I just hope the players are as well because failure to reach the group stage, and they fell well short, could be something they carry with them.”

Hay continued: “Okay, where to begin?

“It is clear that Neil doesn’t fancy, at least right at this moment, either Christopher Jullien or Boli Bolingoli, the left-back, in particular, having a poor game in the first leg.

“As has been mentioned more than once, there was £10million on the bench and the supporters unsurprisingly want to know why.

“I was surprised Neil didn’t look to Johnny Hayes, who isn’t a natural left-back, but has never let us down. 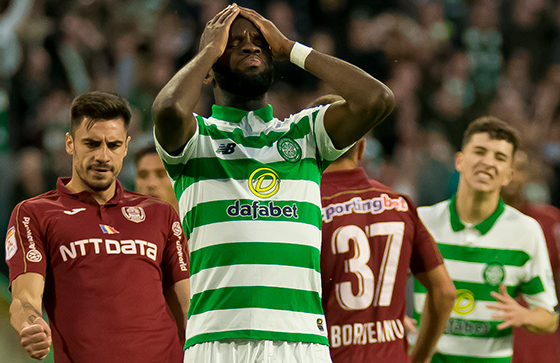 “I’m not saying Callum McGregor can’t play that role but, for me, the midfield triangle of Scott Brown, Ryan Christie and Callum worked so well in the first leg. I wouldn’t have changed it.

“I know he wanted Olivier Ntcham to play, and he did well, but Callum is key to everything the team does.”

Hay added: “Celtic should never lose when the second game is in Glasgow. They were through if they conceded no goals. As it turned out, they could have qualified having given away two.

“Celtic were ahead twice in the second-half at 2-1 and 3-2. The third goal came with 14 minutes to go. There was enough experience and talent in the team to see out the game.

“That Cluj then scored twice is, to me, unacceptable.

“I didn’t see this coming. Neither did the supporters. There was no angry reaction at full-time, a few boos aside. A full Celtic Park couldn’t quite believe what they had just see and walked out without much to say.

“There isn’t any positive spin. If we had lost to a better team then that’s one thing. We scored four goals over two games against a side who I thought were decent, but not better than us, and still we are out.

“However, we scored three goals at home which should always be enough to win. But the defending was awful. Cluj looked like scoring every time they went up the park.”

Celtic kick off the first Cup stage of their quadruple treble hopes against the Fifers in the east end of Glasgow tomorrow afternoon.

The trophy has made its way into the Parkhead trophy room in the past three seasons after successive Hampden triumphs over Aberdeen (3-0), Motherwell (2-0) and the Dons again (1-0).

The Championship outfit will try to capitalise on a team still reeling from the dejection of Tuesday, but Hay is confident Lennon will be able to raise his team for another vitally important confrontation.