NEIL LENNON admits Celtic players were “all in a bit of shock” the last time he visited Broadwood, venue for tomorrow’s Scottish Cup encounter against Clyde.

Fourteen years ago, Gordon Strachan took the holders of the trophy – 1-0 victors over Dundee United in the Final the previous season – to face a line-up that had been put together that summer with a collections of free transfer players dumped by other clubs.

Lennon was the Hoops captain on a fateful afternoon where Manchester United and Republic of Ireland legend Roy Keane realised his boyhood dream and pulled on the green-and-white hoops.

Making his debut the same day was Chinese international Du Wei. The centre-back had a disastrous 45 minutes on a bitterly cold day in Cumbernauld on a rutted pitch where he looked as comfortable as a giraffe on ice.

He was withdrawn at the interval with the Parkhead men trailing 2-0. He was never seen again. Polish striker Maciej Zurawski pulled one back in the second-half, but Strachan’s men stumbled headlong into unwanted folklore.

Lennon is determined to make sure history does not repeat itself on this occasion with the Parkhead men eyeing a phenomenal quadruple treble. 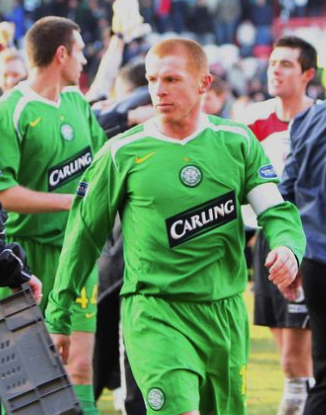 DON’T GIVE MY REGARDS TO BROADWOOD…Neil Lennon afer the Scottish Cup exit against Clyde in 2006.

The Parkhead gaffer, who still picked up the league title at the end a topsy-turvy term, told the Daily Record: “When you lose games like that, your sub-conscience tries to block it out.

“You try not to remember too much about it.

“But everyone keeps reminding me of it this week! I’ve not got happy memories of Clyde. That was a sore one.

“We just didn’t turn up and Clyde were very motivated and deserved to win the game.

“We were all in a bit of shock in the dressing room afterwards.

“There was a lot of hype about the game with Roy Keane making his debut. Du Wei made his debut, too.

“The aftermath was horrible. We even had a meeting at the stadium afterwards and a few things were said.

“It turned out alright in the end. That day things didn’t work out. But it wasn’t the fault of Roy and me!”

Lennon added: “I’ve not mentioned that game to the players. It was years ago. I might bring it up, but the way we are playing with the confidence we are showing I don’t think it’s really necessary.

“But it’s realistic that it can happen now and again. I certainly don’t want it to happen to me as a manager.

“I lost against Morton in the League Cup and that was a sore one to take.

“But as regards Sunday, we will focus on that and be professional and respectful of the opposition. It’s not a foregone conclusion.”