CELTIC have announced the passing of Stevie Chalmers, the man who scored the winning goal in the 2-1 European Cup triumph over Inter Milan in Lisbon on May 25, 1967.

The former Scotland international centre-forward was 83.

Sadly, he has died a week after club legend Billy McNeill who passed away at the age of 79.

The Celtic statement read: IT is with great sadness that we announce the passing of Stevie Chalmers, our loving father and devoted husband to Sadie. The Celtic legend was surrounded by family when he sadly passed away.

In recent times Stevie endured the toughest of battles, but just as he approached every game in a green and white jersey, he tackled his long-term illness with much bravery and dignity. 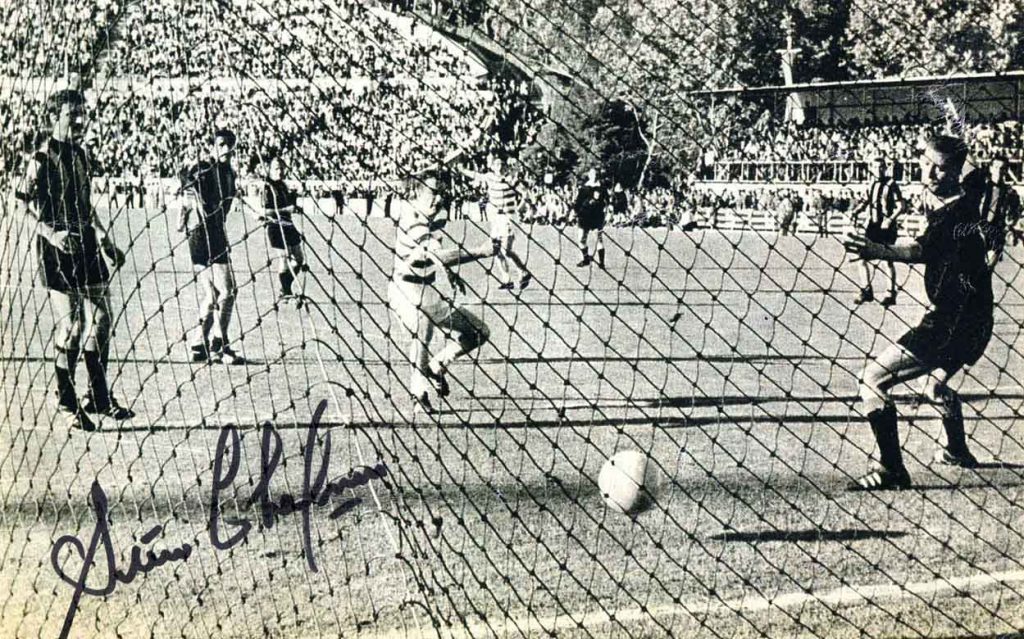 THE WINNER…Stevie Chalmers nets the historic European Cup goal that defeated Inter Milan on May 25, 1967.

He was also part of a wider family and community. His place in history is assured as one of the famous Lisbon Lions who lifted the European Cup for Celtic in 1967 when Stevie scored the winning goal to defeat Inter Milan 2-1 in Portugal. He felt honoured and privileged to have played alongside the Lisbon Lions, and this camaraderie and friendship carried on long after their playing days as the team became lifelong friends.

Celtic was an integral part of Stevie’s life and he devoted much of his career to the famous Glasgow club. He was adored by Celtic supporters in Scotland and around the world, especially for his passion, loyalty and integrity. He felt humbled and honoured when inducted into the Scottish Football Hall of Fame in 2016.

Stevie was a role model for all, especially to his children growing up. In later years, he doted on his grandchildren and they, too, were a great source of love and laughter for Stevie.

In such times of sadness, we must celebrate a life lived to the full. As a family we ask that you remember Stevie with love and affection and take pleasure when recalling the many wonderful times he and his team-mates gave to us all through their wonderful skills on the pitch.

A true gentleman, who will be sadly missed by so many, but will never be forgotten… The legend lives on.