ANGE POSTECOGLOU’S misfiring Celtic suffered travel sickness yet again as they lost their SIXTH away match of his 14-game reign.

Unbelievably, the Hoops slumped to a miserable defeat in West Lothian, their second loss in five visits with the other three ending in draws.

As we all know, you do not win league titles if you cannot win games against the likes of Livi and this will come as a severe wake-up call for the manager who has already witnessed the team losing league matches at Tynecastle and Ibrox. This was the day to stop the rot.

Irrespective of injuries and players missing, Celtic should have had enough to go to the Tony Macaroni Stadium and take full points. That task should not be outwith the expectation levels of a team hoping to make up for the previous wretched season.

A lightweight Hoops outfit just didn’t have the guile or the goal threat to produce the goods. Balls being thrown hopefully into a congested penalty area were welcomed by the home side.

There is much work ahead for Postecoglou because results like this are unacceptable. He will not need anyone to remind him. 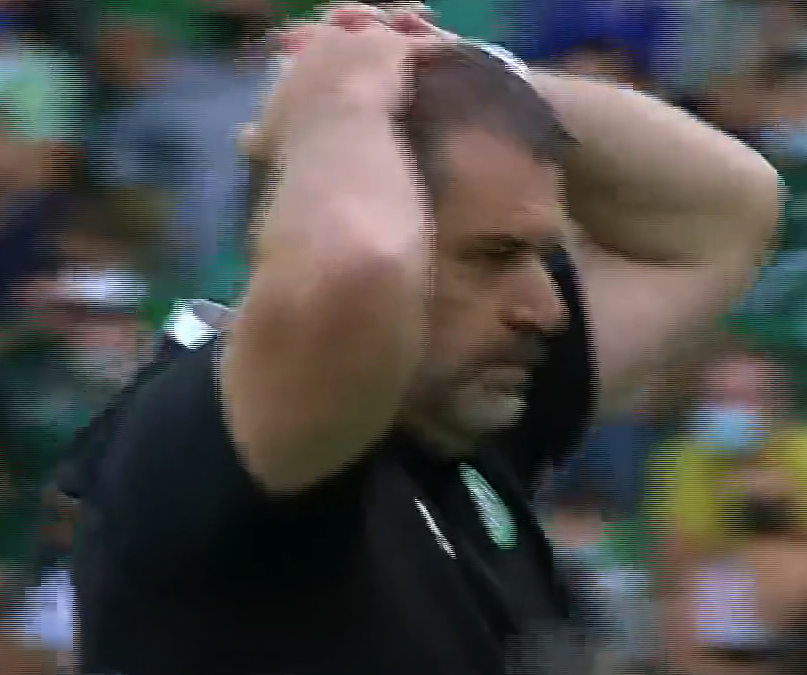 FRUSTRATION…Ange Postecoglou suffered on the touchline at Livingston.

The game had a dramatic start with Livi skipper Nicky Devlin booked inside 30 seconds after sending Albian Ajeti crashing to the ground. Referee Euan Anderson was quick to flash the yellow card, but, unfortunately, David Turnbull’s 25-yard free-kick was comfortable for keeper Max Stryjek as it sailed straight into his grateful arms.

As anticipated, the Hoops dominated the opening 20 minutes, but they rarely threatened despite the majority of possession.

Liel Abada wasn’t quite on the same wavelength as Tom Rogic when he skied over a cross from the right with the Aussie pointing to his feet. The ball sailed harmlessly away from the danger zone.

Jason Holt was next to go into the book after a  clear trip on comeback Bhoy Boli Bolingoli as the Belgian stormed down the left wing. The former Ibrox defender could have no complaint after being warned only a few minutes earlier.

Next up, Adam Lewis floored Ajeti to become the third booking in 20 minutes. The home side were making no pretence about how they would go about trying to stem the threats of their opponents.

In the 25th minute, all of Celtic’s good work was dynamited when Livi scored against the run of play. Once again, the Hoops backline was exposed and yet again they paid a heavy price. 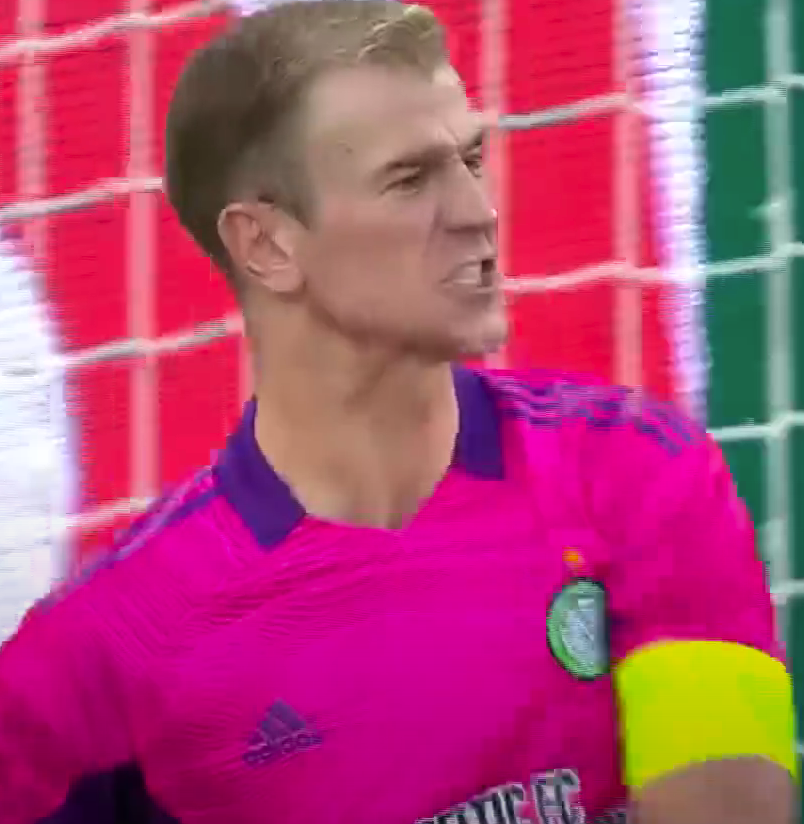 NO DEFENCE…Joe Hart was left exposed on occasion by his dithering back lot.

Andrew Shinnie was allowed to move effortlessly off Stephen Welsh to collect a left-wing pass from Jackson Longridge and shift the ball to his left before turning and hammering an unstoppable angled drive high over the stranded Joe Hart into the top left-hand corner of the net. It was all too easy. And alarming.

In the 39th minute, Turnbull passed up the ideal opportunity to equalise after he was set up by Ajeti following a clever run from Rogic. Lamentably, the midfielder tugged his final effort well wide of the exposed keeper’s left-hand post from a superb position. It was a dire miss.

Two minutes from the interval, an amazing reflex save from Hart prevented the Hoops from conceding another cheap goal. Lewis flighted in a left-wing free-kick and Jack Fitzwater was allowed to sneak in behind a hesitant defence to get a foot to the ball from eight yards. It was thundering towards the back of the net until the captain flicked out a right hand to knock the effort over the bar.

Half-time arrived with Celtic toiling to make an impression while keeper Stryjek had hardly been tested apart from a looping cross from Bolingoli that looked like heading for his his top left-hand corner until he clawed it to safety.

Boss Postecoglou looked fairly grim as he made his way to the dressing room with a lot to sort out, especially a dodgy back lot that was being picked off far too easily during Livi’s breakaways. 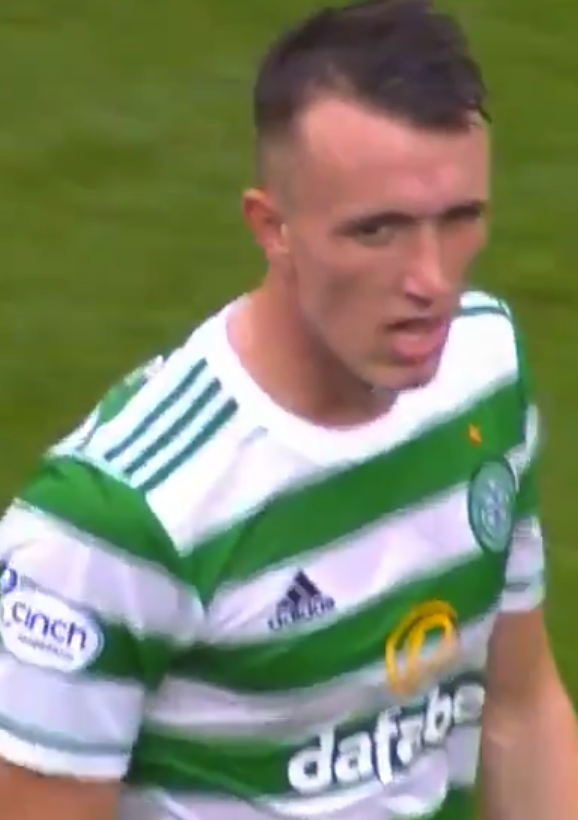 OFF DAY…David Turnbull struggled against Livi.

Celtic started on the ascendancy after the turnaround, but a promising move came to an end when Josip Juranovic carelessly hit a cross into the crowd when he should have done so much better. It was turning out to be one of those days.

Stryjek was called ito action when Welsh diverted a header low to the keeper’s right following a Turnbull left-wing corner-kick. The Pole reacted swiftly to get down and hold the effort on the line.

In the 56th minute, Abada set up Turnbull with an excellent right-wing ball, but the midfielder’s touch was clumsy and the opportunity was lost. Moments later, Turnbull saw a shot well held by the Livi netminder.

Welsh was booked for a challenge on Shinnie after the match official ignored a call from Jota when it looked as though he had been pulled back in the build-up to a Celtic attack.

The Hoops struggled to get rhythm into their play, too often the ball was needlessly surrendered and that was highlighted in the 65th minute when James McCarthy, under no pressure, rolled the ball out of play for a shy to the home side.

Moments later, McCarthy, on his first start, conceded possession again when it looked as though the team were actually putting together a reasonable passage of play. 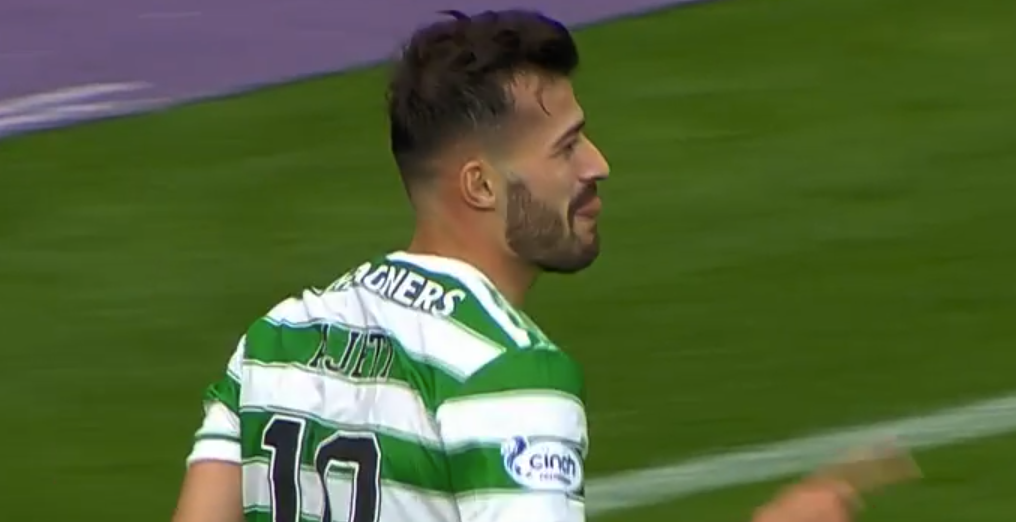 In the 71st minute, Ajeti headed wide from six yards following a good right-wing corner-kick delivery from Turnbull. The keeper didn’t move and the Swiss striker should have buried the effort in the net.

Welsh, Rogic and McCarthy were withdrawn in the 72nd minute as Postecoglou put on Nir Bitton, Ismaila Soro and Mikey Johnston. It was a desperate throw of the dice to somehow turn the game around, but was a hardly enterprising round of changes – two defensive midfielders and a forward who hasn’t played this season because of injury.

Introducing Johnston to the rock-solid worst playing surface in the Premiership was an eyebrow-raiser, especially with other options such as Anthony Ralston and Adam Montgomery, two players deemed good enough to play from the start in Seville, sitting on the bench.

Shortly after the switches, Ajeti sent in a low 18-yard drive that was tipped wide of the right-hand post by Stryjek as the Parkhead men desperately attempted to get something from this contest.

Shinnie was attempting to get into the Guinness Book of Records by falling theatrically to the deck any time anyone wearing a green and white hooped jersey came near him. It was utterly frustrating, but he got away with it time after time.

Celtic were exposed again in a breakaway in the 81st minute and it took a smart diving save from Hart to deny Alan Forrest with Livi heading for their first win of the season.

With four minutes to go, Cameron Carter-Vickers walloped a 25-yard drive past the diving keeper, but it swept just wide of the right-hand upright.

And with that went Celtic’s last chance of salvaging something from a catastrophic performance.

Three defeats, a trio of consecutive away league losses and nine points dropped were not part of the script at the beginning of the campaign.