CELTIC made unwanted history as they crashed to Livingston for the first time ever at the 24th hurdle.

It was a dispirited, disjointed display from Neil Lennon’s men as they got lost in a maze of mistakes and surrendered their Premiership unbeaten record.

If it could go wrong for the 10-man champions following Ryan Christie’s red card, that’s exactly what happened. It was a frustrating afternoon as blunder piled upon error all the way through.

Lennon went into the game knowing he had never beaten Livingston in a league game. He’s still waiting.

Unfortunately, the main talking point from an untidy first-half was the sending-off of Christie in the 25th minute for a totally uncharacteristic challenge on Scott Robinson.

The midfield artist must have got caught up in the moment as he lunged in for the ball and referee Willie Collum didn’t hesitate as he swiftly produced a red card.

Christie could only stand in shock as the match official signalled his match was over. 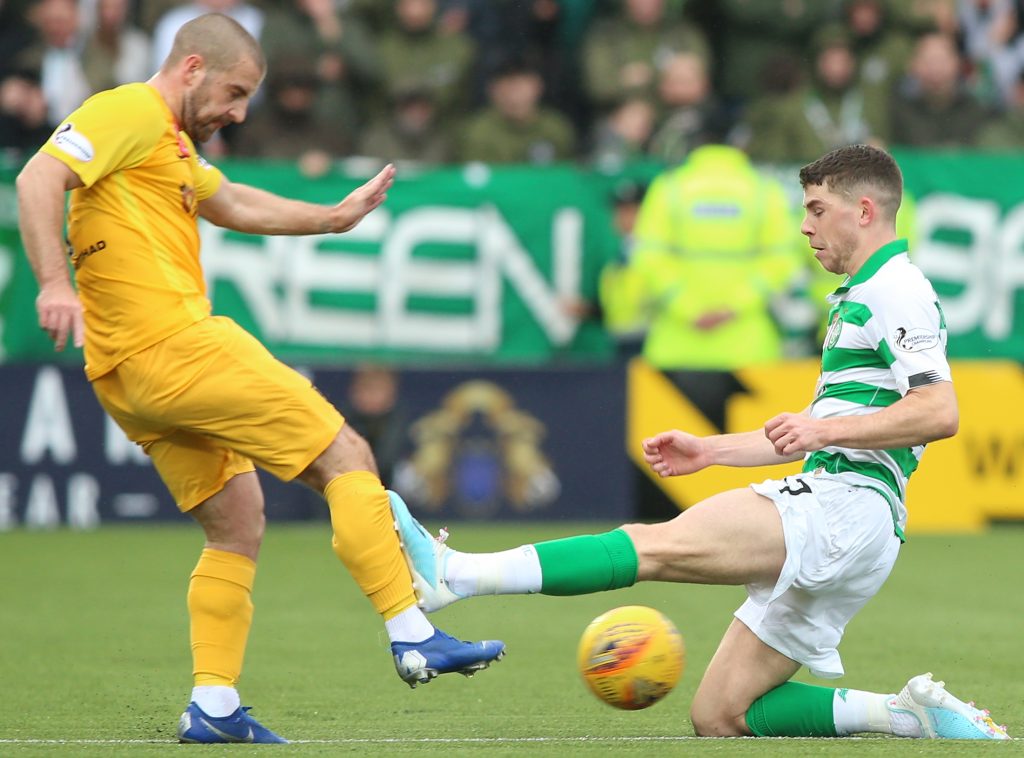 CHALLENGE…Ryan Christie lunges at the ball as Scott Robinson clears. 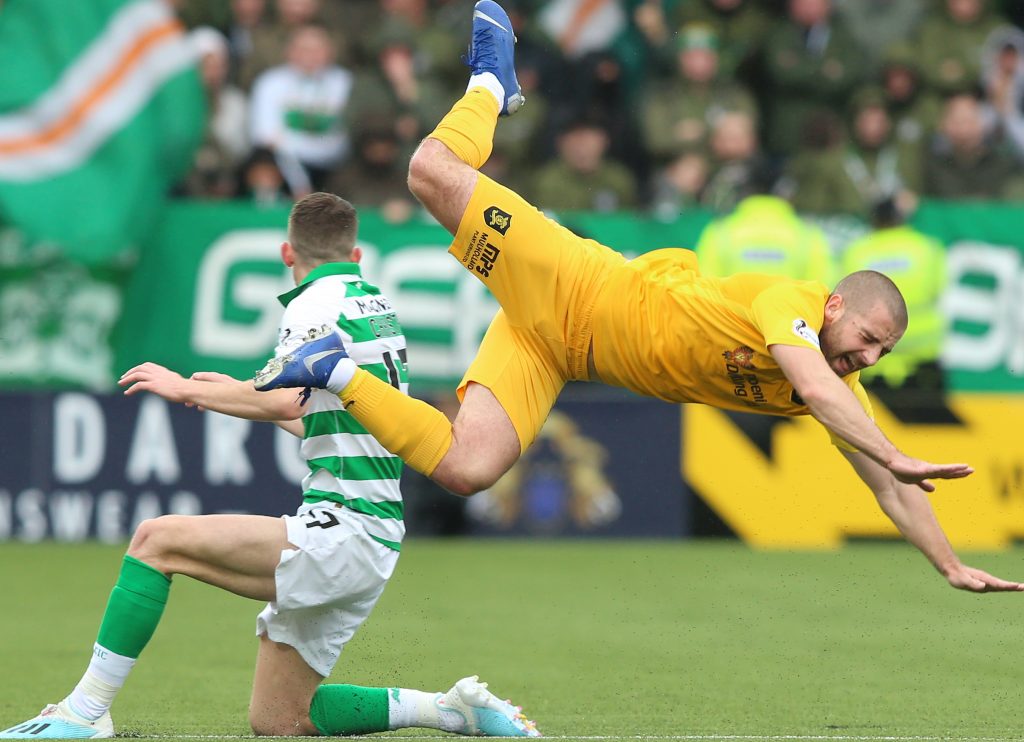 OUCH…the Livi player takes to the air as Christie slides in. 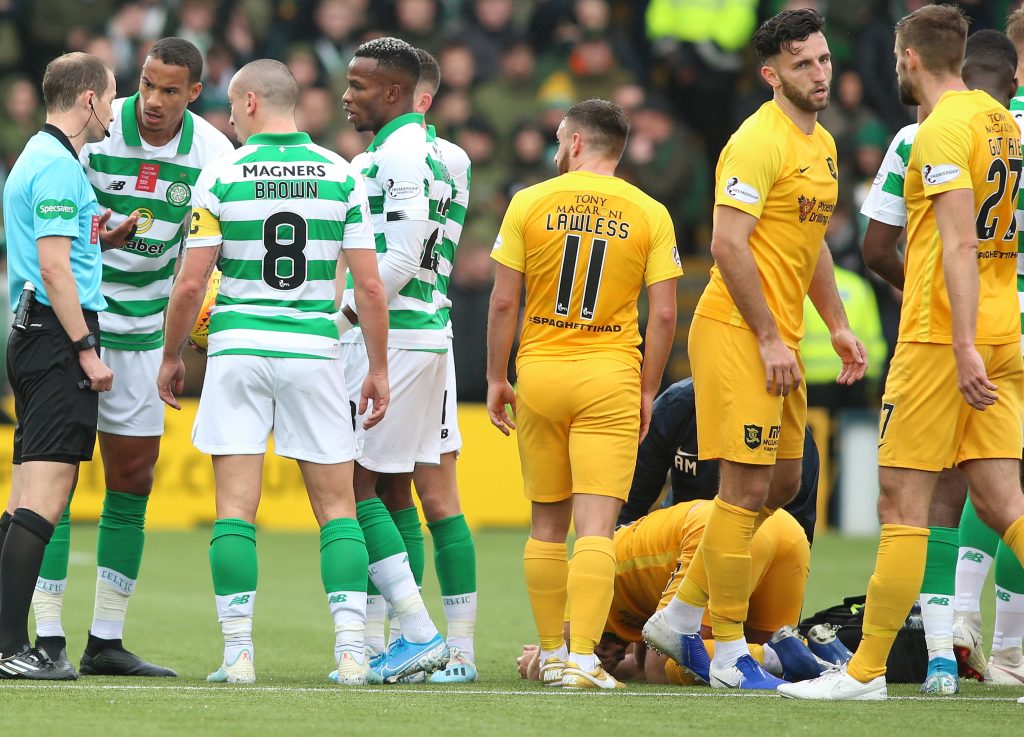 It was the last thing Lennon needed with his team already toiling against a set of players well fired up for the challenge. As anticipated, Livi contested every ball and weren’t too particular about how they went about their business.

That was highlighted in a moment in the first-half when Marvin Bartley went through Odsonne Edouard to make a clearance. The whistler saw nothing wrong with the red-meat assault, but the Frenchman winced as he got back to his feet. He had a fair idea of what lay ahead for the remainder of the confrontation.

So, there were no surprises from Gary Holt’s team who have a habit of making life tough for the Parkhead side.

The opening 45 minutes came and went without a pattern emerging from Celtic’s play. Callum McGregor shut down any time the ball went anywhere near him. Scott Brown, too, was given no breathing space in the middle of the park. 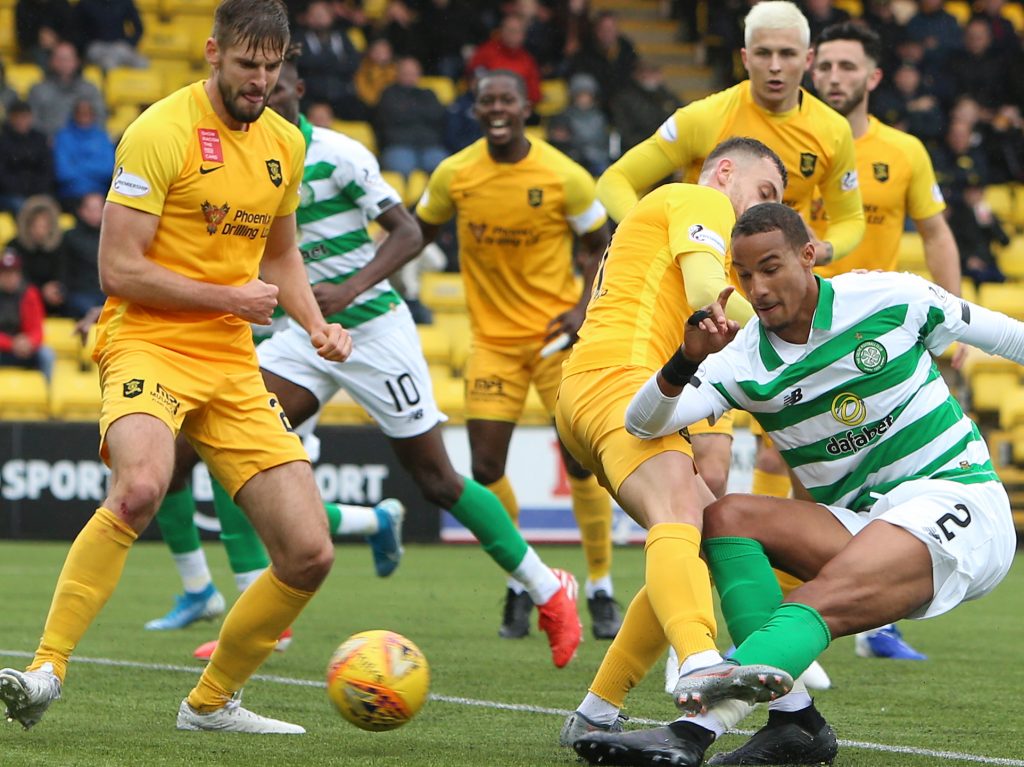 Worryingly, very little had been seen of Mohamed Elyounoussi following his excellent display against Cluj on Thursday.

Kristoffer Ajer’s defensive work left a lot to be desired and he gave the ball away too often to be comfortable.

However, the Norwegian might have opened the scoring just after the half-hour mark when Boli Bolingoli sent over a crisp low cross from the left. The towering defender took a couple of touches, but lost momentum and his shot didn’t unduly trouble Matija Sarkic.

The keeper had to be alert earlier in the game when he dived to his left to beat away a ferocious drive from Edouard.

It was a rare moment of danger for the home side with the champions failing to spark on a horrible surface that does not welcome fast-flowing football.

Fraser Forster was called into action in the 18th minute when his defenders fell asleep at a free-kick and Steven Lawless was left unguarded on the edge of the box. He fired in a low drive to the keeper’s left, but the shotstopper got down athletically to hold the shot at his post.

Two minutes after the turnaround, Ajer got caught in no-man’s land as he tried to run the ball out of defence. He was caught and Livi struck on the counter-attack.

Robbie Crawford played a swift pass into the tracks of Robinson, played onside by Moritz Bauer, and he thumped an unsaveable right-foot shot high past Forster.

Lennon threw on striker Vakoun Issouf Bayo for the ineffective James Forrest in the 54th minute to add support to Edouard. 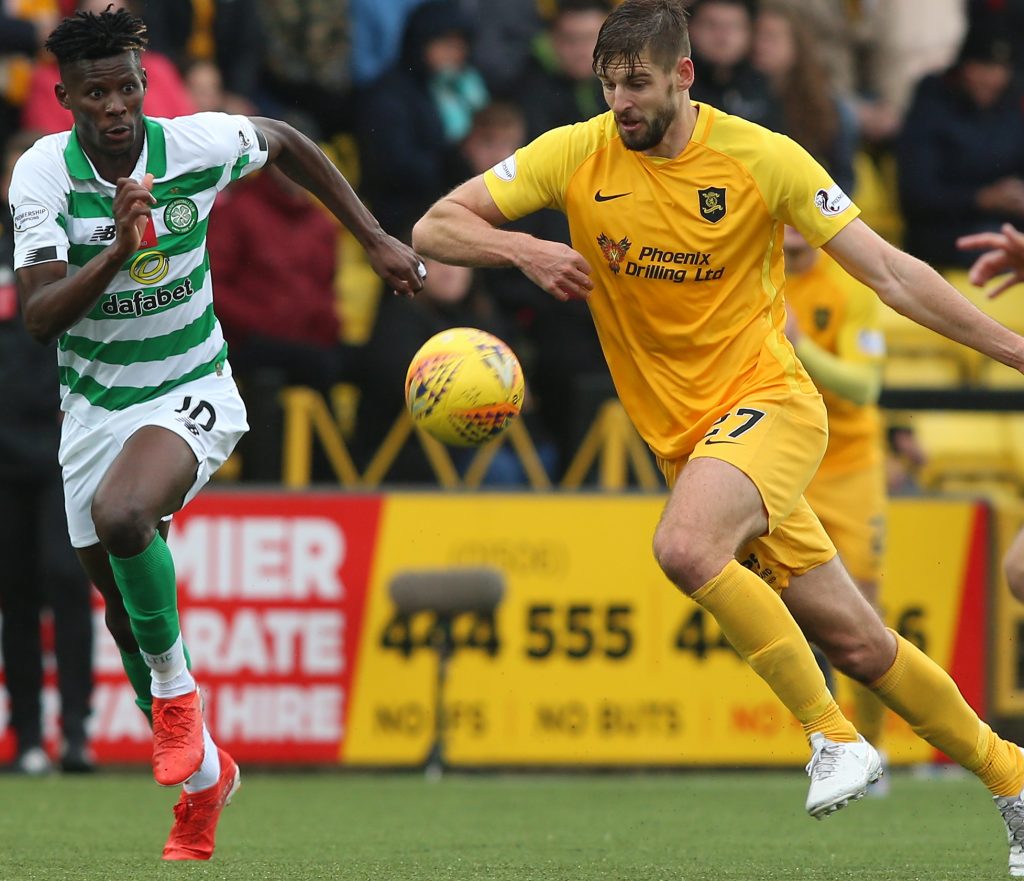 RACE IN ON…substitute Vakoun Issouf Bayo challenges for the ball.

The Irishman replaced Bolingoli with Jonny Hayes in the 73rd minute and the versatile operator arrived just in time to see Livi double their advantage following a disastrous piece of defending.

It was a diabolical goal to concede and Forster, Ajer and Jullien were all culpable as the Livi keeper took a free-kick deep into the Hoops box.

The defenders left it to the keeper, he, in turn, left it to them and Lyndon Dykes had time to get between the players, time the bounce of the ball on the plastic surface and nonchalantly lob the ball into the net.

That goal just about summed up a fairly wretched afternoon for Celtic.

Moments later, skipper Brown came off with Olivier Ntcham taking his place in the middle of the park.

It’s the third successive league game Celtic have lost the first goal – and this time they paid a heavy price.

This was an off-day in more senses than one.