With Scotland missing out on the World Cup play-offs, this weekend’s international break was nothing to look forward to football-wise.

However, as things turned out, I had the honour and privilege of spending my Saturday afternoon in Stirling’s Tolbooth Studios with Lisbon Lion and recent Scottish Football Hall of Fame Inductee, Jim Craig, thanks to the CQN Podcast Bhoys, Paul John Dykes and Kevin Graham.

I made my way upstairs at the impressive venue and recording studio to find a familiar figure. He was actually sitting reading Andy Lynch’s biography Hoops, Stars and Stripes. Rather nervously I introduced myself, it turned out we were both early for the CQN Podcast that was scheduled to start at 3pm. 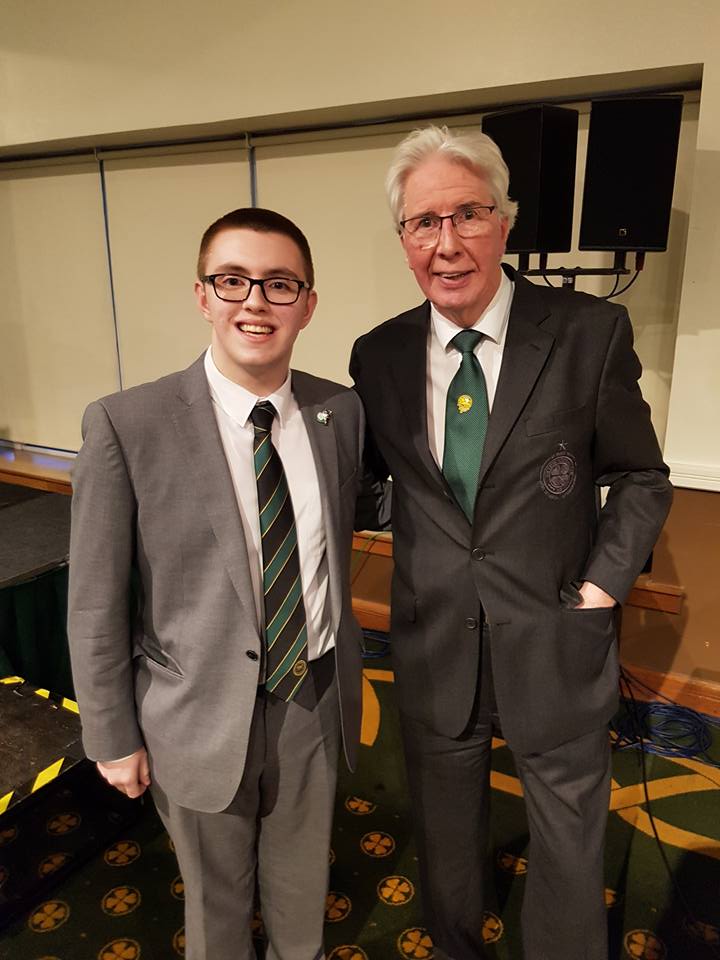 We started chatting and Jim invited me to take a seat. I have met Jim on quite a few occasions this year – above is a pic at one of the events in May – but this time was completely different. There was no crowd of people surrounding him and all that separated us was a small table. I had a Lisbon Lion all to myself!

We started chatting, but it was so surreal as it felt as if I was talking to one of my pals from school and not the man that played right-back in Celtic’s triumphant European Cup Final win over Inter Milan in 1967.

Jim asked me how I had commuted through to Stirling from Glasgow and  he told me that he had just got the bus down because he is getting sick of driving and he could use his pensioners’ bus pass!

Within a few minutes Jim and I were both laughing away with some of the stories which he was telling me about his career in football and dentistry.

When I showed him a chapter on himself from the first ‘Playing for Celtic’ which was produced in 1969 he particularly drew attention to the photos of himself which were in it, telling me to check out his hair style in those days.

The chatting continued until it was time to head for the studio to start Paul and Kevin’s fantastic podcast ‘A Celtic State of Mind’ which also included the extremely talented Kevin Miles who has recently released what I think is one of the best Celtic songs ever written called ‘Celtic My Heart & My Soul.’

The podcast interview which Paul and Kevin done with Jim was absolutely fantastic. Jim reminisced about coming back to Celtic in 1965 and told some great stories about Tommy Gemmell, Bobby Murdoch and the what it has been like being a Lisbon Lion for fifty-years.

The CQN podcast is a must-listen for all Celtic fans and will be available very soon.

CQN Books are also publishing Jim’s new book ‘Right Back to 67 – The Lisbon Lion Diary’ and it sounds an absolutely cracker. The book is now available to pre-order on the CQN bookstore.com and Jim has agreed to sign all the books sold through CQN.

I cannot thank the guys enough for inviting me along to sit-in on Jim’s interview and listen to the brilliant Kevin Miles. Though, my thanks go to Jim Craig for chatting to me and putting such a perfect pass across the eighteen-yard line for Tommy Gemmell to smash home in the 1967 European Cup Final.