Celtic Quick News on News Now
You are at:Home»Latest News»NEW BHOY WILL ‘HAVE BEST DAY OF HIS LIFE’
By CQN Magazine on 22nd July 2019 Latest News

FORMER Celtic midfielder Beram Kayal is convinced his pal Hatem Abd Elhamed will be a joy Bhoy as soon as he pens his four-year deal with the champions.

The 28-year-old Israeli defender is poised to join the Hoops following Hapoel Be’er Sheva’s acceptance of the £1.6million offer from the Parkhead side.

Abd Elhamed still faces a medical and some red tape concerning a work permit, but that should not present a problem for the international right-back, as CQN reported yesterday.

Kayal, who was sold to Brighton by ex-boss Ronny Deila in 2015, has no doubt his friend is in line for an unforgettable experience.

The 31-year-old, speaking to the Daily Record, said: “This is a big opportunity for Hatem. I’m so happy for him to get the chance to join a big club like Celtic. Obviously, he asked me for advice because I would class him as a friend.

“What did I say to him? I told him that it will probably be the best day of his life when he signs for Celtic.

“He’s a really good player and, most importantly, he’s ready to be a Celtic player.

“When you are joining such a big club as Celtic, then you need experience and he has that now, including making his debut for the international team.

“He was in Gent in Belgium, but it didn’t work out and he returned to Israel. 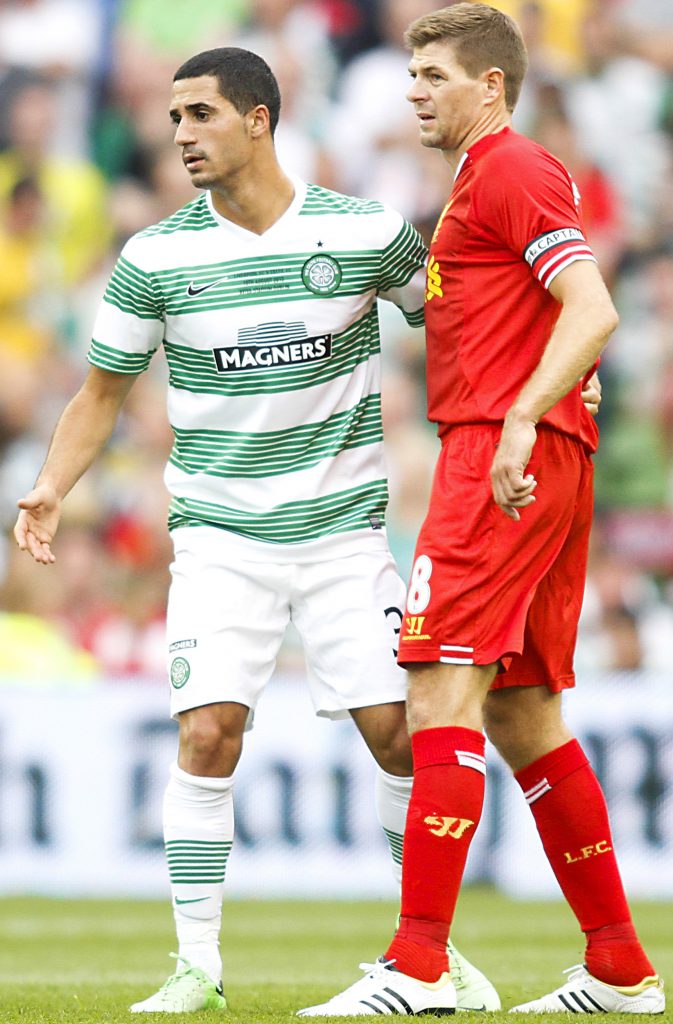 CLOSE CALL…Beram Kayal keeps a watch on Liverpool skipper Steven Gerrard during a 1-0 friendly win for the Hoops in the summer of 2013.

“This is now the time for him as I believe he has a stronger mentality and he is more  experienced.

“He’s really fast, knows how to defend and he’s calm with the ball at his feet. He can play in two positions, right back and centre back, so that versatility is also an advantage.

“I know him as a centre back. I know he has played right back a few times, so I don’t know what the club has planned for him.

“But with all due respect to the players who are at the club just now, he has to take this  opportunity for himself and prove himself at such a big club.

“He is a winner and has a good character. I am sure he will fit well into the dressing room.”

Kayal was originally signed by Neil Lennon and won four league titles and two Scottish Cups in four-and-a-half years at Parkhead and Abd Elhamed will be hoping to emulate that achievement.

The Irishman has been on the look-out for a new No.2 since Mikael Lustig and Cristian Gamboa left at the end of their contracts last month and Jeremy Toljan returned to Borussia Dortmund when his loan deal expired.

Danny Simpson, the former Premier League winner who has been released by Leicester City, has also been mentioned as a possibility to join the Hoops, but that proposed move appears to have stalled.