FURIOUS Neil Lennon threatened a clear-out of under-performing flops after Celtic’s miserable showing in the 2-1 loss to Ferencavros as they exited the Champions League for the third consecutive year.

The stunned manager accepted full responsibility for a dreadful display against the Hungarians that saw the Hoops collapse out of a European tournament for the third time in just over a year following last season’s home defeat from the Romanians of Cluj and the Danes of FC Copenhagen.

The loss wiped over £30million of European prize money from the club’s budget in a crucial campaign where they are aiming to make history by winning 10 titles in succession.

However, any thoughts of glory were well and truly put on the back-burner following a feeble showing against Ferencvaros.

Lennon, speaking to the media, said: “There are some players who may want to leave and have made inroads into that in the last six months or so.

The Scotland international netted a second-half equaliser, but a blunder by Hatem Abd Elhamed and some weak goalkeeping by Vasilis Barkas allowed the visitors to score the winning goal with 15 minutes to go. 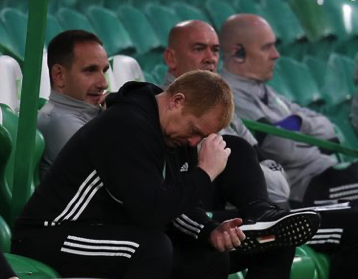 Lennon commented: “They (Ajeti and Klimala) are not match fit yet. It’s quite obvious, otherwise at least one of them would be playing. I want to play strikers, we were missing the big one (Edouard). I don’t know how much effect that had. We still had enough chances to win.

“We lacked a killer instinct on Saturday and he was playing. We will all regret it and we will have to suck it up for a few days. The best thing we can do is get back out and play. There are no excuses from me for the players. We have to apologise to the supporters

“The first goal we can maybe legislate a little bit, the second goal is really poor decision-making. It’s individual mistakes. It’s cost us against Copenhagen (in the last 32 of the Europa League last season) and it’s cost us again.

“If you keep giving the opposition oxygen they hang in there. They score early. We don’t get out quick enough to stop the shot which was poor for us. But in the second-half we dominated. We should have won the game“

I don’t know if we budget for it, but for everyone associated with the club it’s massively disappointing. I thought we were by far the better team.”