OLIVIER NTCHAM has failed to spark at Celtic since the champions knocked back a bid from Portuguese giants Porto last month.

That’s the verdict of former Ibrox striker Kris Boyd who insists the French Under-21 international midfielder has not been the same player since being denied a £14million move from Parkhead.

The veteran frontman, back on the substitutes’ bench at Kilmarnock, made the astonishing observation there is unrest in Brendan Rodgers’ team’s dressing room.

Making the claim even more absurd is the fact Ntcham, who cost £4.5million from Manchester City last summer, turned in a Man of the Match display and scored the only goal of the encounter against Steven Gerrard’s team – TWO days after the transfer deadline.

The Hoops had already sold his compatriot Moussa Dembele to Lyon for £19.7million just hours before the window closed and had also rejected a £9million bid from Fulham for Dedryck Boyata.

Boyd insists Ntcham wanted to follow Dembele out of Parkhead.

He said: “I think it’s quite clear. I know there was a meeting after the Champions League exit. There’s a divide in the dressing room. There’s no doubt about it. Is that what I’m hearing? One hundred per cent.

“You only need to look at the Dedryk Boyata scenario, you look at Moussa Dembele, at Ntcham.

“There was interest from Porto. If a club wants to pay £14million for you, that guy’s wages will be going through the roof if he goes there. He wants to go – and Boyata is the exact same, there’s no doubt.

“You only need to look at their performances. Are they really that bothered to be playing in a Celtic jersey right now? Not for me. 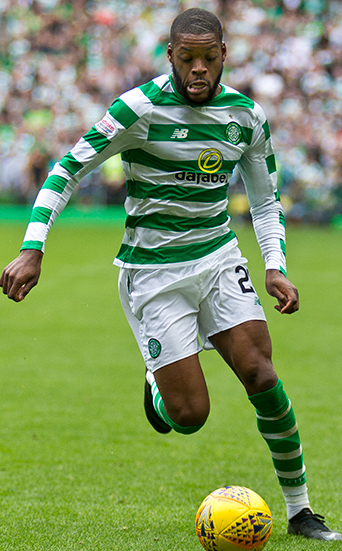 MAN OF THE MATCH…Olivier Ntcham ran the show against Boyd’s old club.

“Ntcham was excellent for the first three or four games of the season, but since the transfer window has shut and Moussa Dembele has gone, Ntcham looks a shadow of the player he was.”

Boyd has probably missed the fact Boyata returned to the Hoops first team against Hamilton Accies on August 26 and scored the only goal of the game.

He was praised by boss Rodgers for his part in Thursday’s 1-0 Europa League win over Rosenborg at Parkhead where the Belgian central defender and Filip Benkovic hardly put a foot wrong.

Boyd has also warned the seven-in-a-row title-winners the rest of Scottish football now has their number and that they should be “worried”.

A stoppage-time goal downed the Hoops at Rugby Park at the weekend and left the Hoops with just 10 points from six league games.

The unused sub added: “Brendan won’t change the way he plays. It’s pass, pass, pass. There’s a lot of players playing within themselves.

“The rest of the clubs know that there is a way to play against Celtic now. We’ll sit in, we’ll frustrate them.

“We know if you give Celtic space in behind when they’ve got pace they’re going to hurt you.

“But if you make the pitch as narrow as you possibly can and let Celtic have the ball, it’s very difficult for them to break you down.

“If they don’t play through you, if they don’t cut you wide open, then they’re going to struggle to score.

“They’ve not got that confidence when they’ll try things because the Celtic players look as if they’re scared to give the ball away.”