Celtic Quick News on News Now
You are at:Home»Football Matters»‘ONLY OUR BEST WILL DO,’ DEILA
By CQN Magazine on 19th August 2015 Football Matters
RONNY DEILA insists Celtic will overcome Malmo in tonight’s first leg of the Champions League play-offs in Glasgow – but only if they are at their best.
The Hoops boss has led the team through two previous preliminary rounds in games with Stjarnan and Qarabag to stay in contention.Now they are three hours away from a return to Europe’s top flight for the first time in two years after being eliminated at this stage last term by Slovenian side Maribor.

Deila feels his side have learned a lot in the 12 months since and believes they showed good professionalism as they drew 0-0 in Azerbaijan earlier this month to progress to the final eliminator.

The Norwegian said: “We want to come into the Champions League, that’s the goal. I’ve said that since I came into this club.

“Now we have two games to reach it so we just have to be the best we can be. If we do that but are not successful, we are not good enough.

“I think if we are at our best, it’s going to be tough for Malmo, as well. I know the only thing I can do something with is the performance of the team and I trust my team.

“We have played a lot of games now. I can’t remember the last time we lost a game. The team is in good shape and has a lot of confidence so we’ll see how it is tomorrow against Malmo.”

Mikael Lustig also hopes past frustrations in Europe will drive the squad on to improved performances across the two legs. 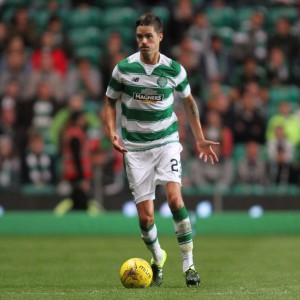 The Sweden right-back said: “It’s just unbelievable to have Champions League games at Celtic Park. We’re going to make sure we don’t mess it up this year.

“We’re ready, we’ve been solid in Europe so far. We played really good defensively against Qarabag, our confidence is good now so I think we are ready.

“We played okay in the Europa League and were very close to the treble, but the aim is to reach the Champions League.”
Click Here for Comments >
Share. Twitter Facebook Google+ Pinterest LinkedIn Tumblr Email
Previous ArticleFLOP BERGET PROMISES PAIN FOR THE HOOPS
Next Article CELTIC’S £4m SIMUNOVIC BID REJECTED CLAIM ZAGREB