CALLUM McGREGOR has told the critics not to write off Celtic in the Champions League return against FC Midtjylland a week tonight.

The new Hoops captain was one of the team’s best players as they were held to a 1-1 draw in the first leg of the second round qualifier at Parkhead last night.

However, Ange Postecoglou’s side once again pressed the self-destruct button that was utilised far too often during last season’s catastrophic campaign.

With the team leading 1-0 through a debut strike from new Bhoy Liel Abada, Nir Bitton foolishly saw red just before the interval and error-prone keeper Vaslis Barkas presented the Danes with a second-half equaliser as he contrived to flap at Evander’s angled free-kick that whipped into the net off the inside of the far post. It was just another horrible mistake in the Greek’s catalogue of calamity since his £4.5million arrival from AEK Athens last summer.

Despite both sides finishing with 10 men – Anders Dreyer was ordered off nine minutes after the interval following another pathetic dive – McGregor is convinced a meeting with either PSV Eindhoven or Galatasaray at the next stage is still a distinct possibility. 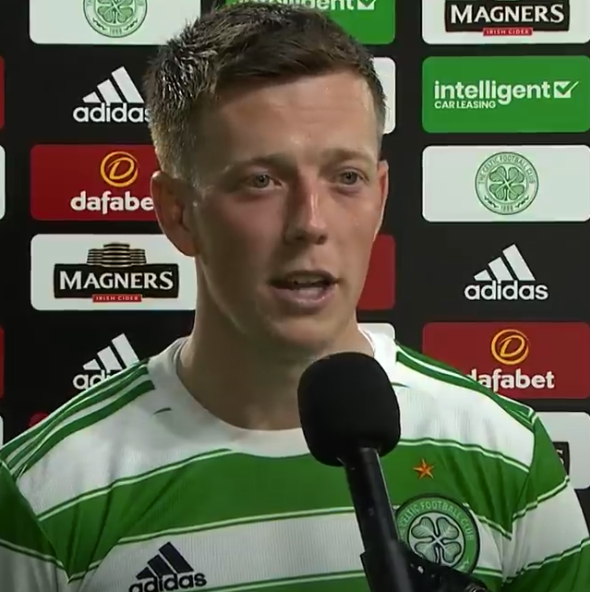 THIS IS YOUR CAPTAIN CALLING…Callum McGregor interviewed after the draw. Image courtesy Celtic TV.

The midfielder, who smacked a shot off the crossbar in the second-half, said: “We are a little bit disappointed as I felt we deserved to win the game.

“We had enough chances to win and, considering it was out first proper game, the boys gave absolutely everything.

“We just lacked a wee bit of quality in the final third, but the tie isn’t over yet and we will go over to Denmark next week and try to finish the job.”

Ryan Christie also knocked on wood when he hit the post from six yards in the first-half and Odsonne Edouard passed up an excellent opportunity when he was sent clear, but his feeble shot didn’t unduly worry keeper Jonas Lossi.

McGregor, speaking to the Daily Record, added: “Is it an opportunity lost? A little bit. When we go down to 10 men, you lose a bit of impetus in the game a bit.

“They got a man sent off, too, but we still played a reasonable amount of time with a man down.

“You can’t be too open in Europe as you lose a goal and then you are chasing it. A draw was maybe a fair result although we had good chances to win it.

“But we know that we now have another leg to go and do the business.”