PATRYK KLIMALA is aiming to lose the learner plates in the new season with Celtic looking to crashing the history books again with the tenth successive title in their sights.

The Polish striker, who arrived in a £3.5million switch in January, started only one game and made three substitute appearances for the Hoops as he settled into the demands of Parkhead.

A bulked-up Klimala scored his first goal for Neil Lennon’s men in the 1-1 draw against Nice last week and also made appearances in the other games against Lyon and Paris Saint-Germain during the three-game warm-up tour of France.

Now the determined hitman is aiming to make up for lost time in the forthcoming campaign with the Premiership due to kick off a week on Sunday with the match against Hamilton Accies on Flag Day in the east end of Glasgow.

Leigh Griffiths is off the radar at the moment after being left at home to work on his own at Lennoxtown after returning from lockdown overweight and Vakoun Bayo is struggling to overcome a niggling injury.

Klimala now has a golden opportunity to impress the Hoops gaffer and stake his claim for a place alongside Odsonne Edouard if Lennon decides to keep the double striker role he utilised for most of the season when the champions returned from the break.

The 21-year-old frontman’s former coach Ireneusz Mamrot, now in charge of Arka Gydnia, is well aware of his ex-player’s qualities after developing his skills at Jagiellonia Bialystok.

The Polish boss, speaking to the Daily Record, said: “Patryk is ready to play, but he needs to work with new tactics and new systems.

“Maybe the coach wants something different from him than I did and some new things.

“He has to know that and adapt to those new styles and expectations, but it should be easier for him having had some experiences last season.

“I have experience of this with Patryk. When he joined Jagiellonia at first, he needed time to adapt. But once he learned it all, he became the strong point of the team.

“I hope that will be the same situation for him at Celtic. I’d expect that he can score goals, make assists for his team-mates and he will achieve something.” 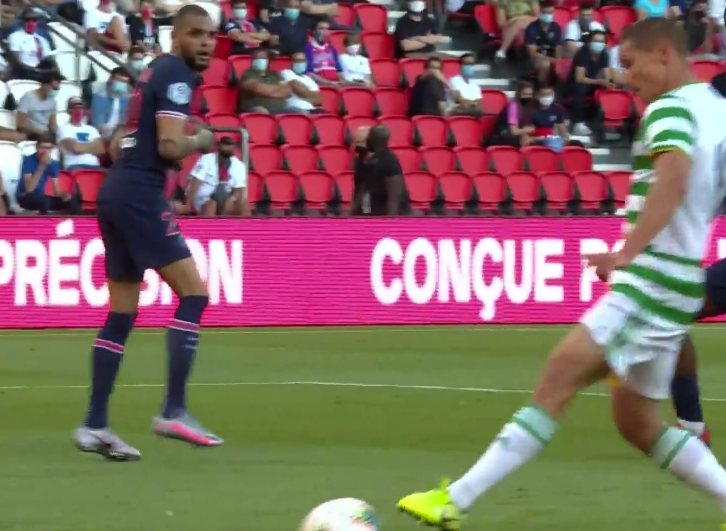 SO CLOSE…Patryk Klimala just fails to connect with a cross from James Forrest against PSG.

Mamrot added: “Patryk won’t have any problems dealing with the type of pressures that he’ll face at Celtic.

“In fact, I would say he will actually like having to deal with this type of expectation.

“Mentally, Patryk is very strong. He never worries about what people say about him. He just focuses on himself and what he has to do for the team.

“In my opinion, the bigger the club, the better it will be for Patryk because it will just motivate him more to do better.

“He knows that Celtic has a lot of fans, but he loves it and the atmosphere at the stadium.

“Patryk was quite strong before he went to Glasgow, but he needed to improve upon it. He did it. But that is him. That’s his way of work.

“What he does in his job means he sees what he needs to improve and then he works to make sure that he does it.

“I just hope that it doesn’t affect his dynamics too much because it is important for him to keep his speed and not lose that.

“But it is true that Patryk has to improve his game when he has his back to the goal and he is having to link the play, so getting stronger will help him for that situation and that part of the play.

“It will also help him to be more of a colleague. Patryk’s speed and strength and his power are his best assets.

“We have to emphasise that he likes it when balls are played up between the defenders and the goalkeepers and he likes to score his goals, but he must learn to do those other things.

“The attribute I like most in Patryk is that speed, but also his endurance. He is determined to score in every game that he plays and he works so hard. It is an incredible work-rate. I never had to ask him twice to do something.”