ZIGGY GORDON, the former Hamilton Accies defender, believes his fellow-Pole Patryk Klimala would be a smash-hit at Celtic.

The right-back faced the international Under-21 striker in training during his one year with Jagiellonia Bialystok and was impressed by the Hoops target.

Klimala was just 19 when Gordon was at the club two years ago, but he is now rated in the £3.5million bracket after hitting seven goals in 16 appearances for his club this season.

Next month’s Europa League rivals FC Copenhagen are also on the trail of the youngster while Serie A outfit Genoa and a number of Bundesliga clubs have been linked.

Gordon saw the prospect up close on a daily basis on the training field and the experienced wing-back, now at Central Coast Mariners in Australia, told the Daily Record: “Patryck was highly thought of when I was with the club.

“He was a young player coming through the ranks, but was clearly a very good player who they rated.

“He always had pace, but was only 19 at the time. He was raw and inexperienced.

“But he clearly had talent and when he went on loan to Wigry Suwalki in the division below that’s when he began to flourish, playing every week and scoring goals. 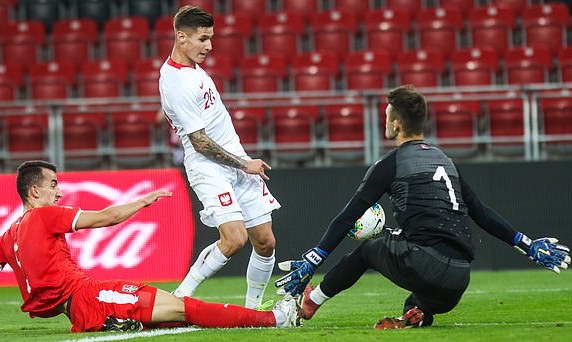 “The next season he was given a chance which he took with both hands. He’s been a regular starter since and from what I hear has done very well.

“The Polish league is very similar to the Scottish game in terms of its intensity.

“Patryk certainly works hard and doesn’t give defenders much time on the ball. He works for every scrap he can possibly get.

“He likes to lean on the shoulder of defenders and get in behind and he is a very good striker of the ball.

“He is like a Leigh Griffiths-type of player that when he gets a chance he takes it. He likes to play on the edge of the defensive line and works his socks off like Griffiths does.

“I trained with him every day and he was always someone who didn’t give you time on the ball. He was hard working, energetic, enthusiastic and they are traits that you need in the Scottish league, especially playing for Celtic.”

Klimala still has 18 months left to run on his contract, but is available for £3.5milion.

Gordon added: “The valuation is what the club think he is worth.

“They are a selling club and I am sure they would let him go for the right price.”

Neil Lennon has other striking targets on his radar with Slovan Bratislava £5million-rated Andraz Sporar ion the list. He is also being tracked by Sporting Lisbon, Bristol City and Qatar ckub Al-Gharafa.