TOM ROGIC has revealed Brendan Rodgers is relentless in his bid for unparalleled success at Celtic.

The Hoops boss led the team to historic double trebles over the past two seasons – and has set his sights on emulating that feat again this time out.

Aussie World Cup midfielder Rogic said: “That’s how the manager works. He’s challenging the players every day to become better, he certainly doesn’t let anyone rest on what they may have achieved last season or the years before that.

“He’s intense to work under, he’s always challenging the players to become better and better and I think that’s a major part of our success over the past couple of years.”

Rodgers’ unquenchable desire to guide his boyhood idols to higher levels has led to some apparent friction with the board.

There has been obvious frustration in losing out to Aston Villa for Scotland international John McGinn who had been tracked throughout the summer. 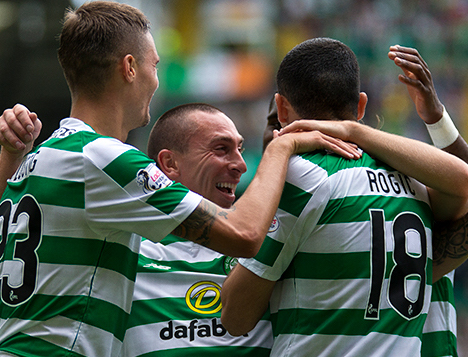 JOY BHOYS…Tom Rogic is congratulated by Mikael Lustig and Scott Brown after his goal against Livingston.

The Hoops made four bids for the 23-year-old midfielder, but the Championship outfit swooped during the week to get the Hibs star on a four-year contract.

Rogic, who signed a new five-year contract in May, has sidestepped events off the park, though, and said: “From the players’ point of view, it is just to focus on playing.

“Outside of that, it’s not really for me to have an opinion. I’m happy with how things are, I’m happy with the manager day to day, we have a great squad and it’s exciting for the start of the season.”

Rogic scored the first goal in last week’s 3-1 win over Livingston to kick off the Premiership season and the club’s aim for eight titles in succession.

As he prepared for this afternoon’s encounter against Hearts at Tynecastle, the classy playmaker added: “It’s important to start the season well and I think we did that last weekend.

“Now it is just about carrying that on and building some momentum for the rest of the season.”

* DON’T miss the best of today’s big match action from Tynecastle in words and pictures – in your champion CQN.