CELTIC legend Kenny Dalglish has applauded the efforts of Neil Lennon in Europe  – but has warned of a backlash from Lazio in Rome.

The former Hoops star was at Parkhead on Thursday night to see his old club come back from a goal down at the interval to overcome the Serie A outfit Lazio 2-1 to remain on top of Group E on seven points.

The three-time European Cup winner name-checked four of the champions’ players who have caught his eye. 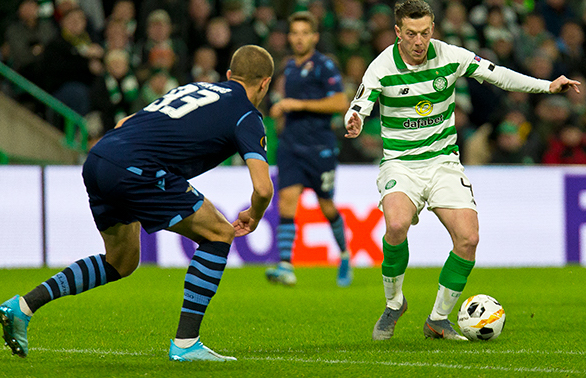 ON THE BALL…Callum McGregor prepares to take on a Lazio defender.

Sir Kenny, speaking to the Evening Times, said: “Ryan Christie has broken through with Celtic in the last year and Mikey Johnston had looked good before he got injured.

“James Forrest and Callum McGregor have been there for a long time and there are a few other boys coming along and that augurs well.”

However, Dalglish told the Parkhead players not to get too carried away before they take on Simone Inzaghi’s side a week on Thursday.

He added: “I thought Celtic deserved to beat Lazio because they played really well. But you’ve also got to be careful that you don’t go overboard because we don’t know how genuine Lazio were about this competition and how much it means to them.

“They left out seven players on Thursday night, but that doesn’t matter because you can only beat the ones who are on the pitch and Celtic did that and they merited the win.” 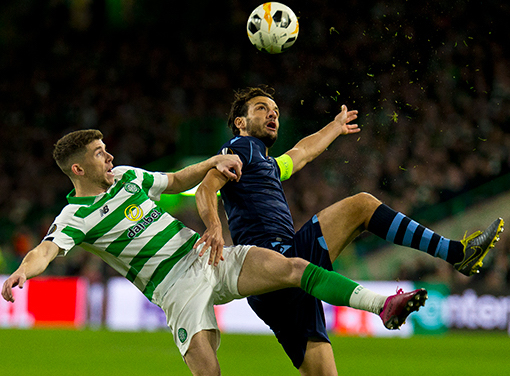 EYES ON THE PRIZE…Ryan Christie in a midfield duel with Lazio skipper Manuel Parolo.

The eight-in-a-row champions were rocked just before the interval when the slick Italians hit the with a classic sucker-punch when a Ryan Christie shot was blocked and three passes later winger Manuaul Lazzari was clean through on Fraser Forster to thump in an angled drive.

However, Christie swept in the equaliser in the 67th minute and Christopher Jullien headed in the winner with just one minute of regulation time to go.

Lennon’s men have seven points from their three games after beating Lazio and Cluj in Glasgow and drawing 1-1 with Rennes in France.