JOZO SIMUNOVIC was red-carded in the goalless pre-season stalemate with Swiss top-flight side St Gallen as Celtic prepared for Tuesday’s Champions League qualifier against FK Sarajevo in Bosnia.

The Croatian central defender was banished in the 75th minute when VAR was brought into play and the referee reviewed a robust challenge.

The match official stunned the Hoops by sending off Simunovic and keeper Scott Bain had to produce an excellent save from the resultant free-kick to keep the scoreline intact.

It just wasn’t Neil Lennon’s men’s evening with Scottish Cup Final hero passing up an opportunity gtom the penalty spot when he saw his effort touched onto the post by the keeper. 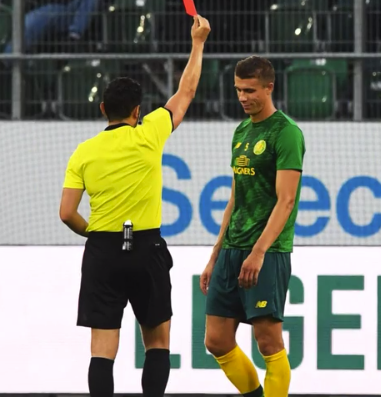 It was a useful work-out for the Hoops as they attempted to get the rust out of their limbs ahead of the start of the competitive action next week. .

There was no sign of new Bhoy Christopher Jullien, signed on Friday for £7million from French outfit Toulouse, with Neil Lennon starting with Simunovic and Kristoffer Ajer in central defence.

Mikey Johnston looked lively throughout and there were some neat touches from Ukrainian winger Marian Shved.

VAR was called on midway through the first-half when Anthony Ralston’s long-range shot was ultimately ruled to have been handled inside the box. Unfortunately, Edouard failed from the spot.

However, the Swiss were also out of luck when a drive from Dereck Kutesa rebounded from a post nearing the interval.

In the 70th minute, Jonny Hayes fired wide from a good position after some speedy lead-up play from Callum McGregor, James Forrest and Johnston.

The game ended goalless as the champions completed their three-match pre-season preparation in Austria and Switzerland with two wins and a draw.