ADAM MONTGOMERY is poised to make a quickfire comeback to Celtic’s starting line-up against Raith Rovers in the League Cup quarter-final at Parkhead on Thursday night.

The 18-year-old left-back was an unused substitute in the 1-0 loss at Livingston on Sunday when Ange Postecoglou sprung a surprise by bringing in Boli Bolingoli for his first top-side appearance since his Covid-busting break to Spain in August last year.

Montgomery made his first start against Real Betis in the 4-3 defeat in the Europa League Group B opener in Seville five days ago and played the entire 90-plus minutes.

However, Postecoglou took the decision to rest the youngster at the weekend, but it is odds-on he will return against the Fifers. 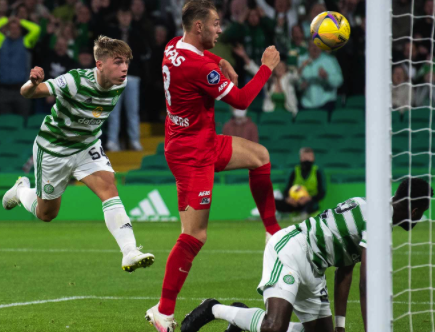 HEADING FOR THE TOP…Adam Montgomery is out of luck on this occasion as his header is cleared off the AZ Alkmaar goal-line in the 2-0 win at Parkhead last month.

It will mean Bolingoli stepping down in a now-you-see-me-now-you-don’t moment.

The No.3 spot has become a problem position for the Hoops boss who was forced to play right-sided Josip Juranovic out of position with Anthony Ralston on the right in the 1-0 loss at Ibrox last month.

Greg Taylor, who started the campaign as Postecoglou’s first choice in the 1-1 Champions League qualifying draw against FC Midtjylland in July, could be facing two months on the sidelines after undergoing surgery on his shoulder injury yesterday.

The Scotland international sustained the knock in the Europa League Cup play-off final second leg against AZ Alkmaar in the Netherlands when Montgomery was called in for over an hour as the Hoops battled through to the group stages.

Now the attack-minded teen is poised to make his first start at Parkhead.