Celtic Quick News on News Now
You are at:Home»Football Matters»TEENAGER BACKED TO IMPRESS BRENDAN
By CQN Magazine on 27th May 2016 Football Matters
NORWEGIAN wonderboy Kristoffer Ajer kicks off his four-year deal at Celtic this summer.
And Espen Borufsen, soon to be a former team-mate at IK Start, is backing the 18-year-old attacking midfielder to be a huge hit at the five-in-a-row champions.
He said: “Celtic are a good team but there is no reason why he won’t get a game as he is a very good player. 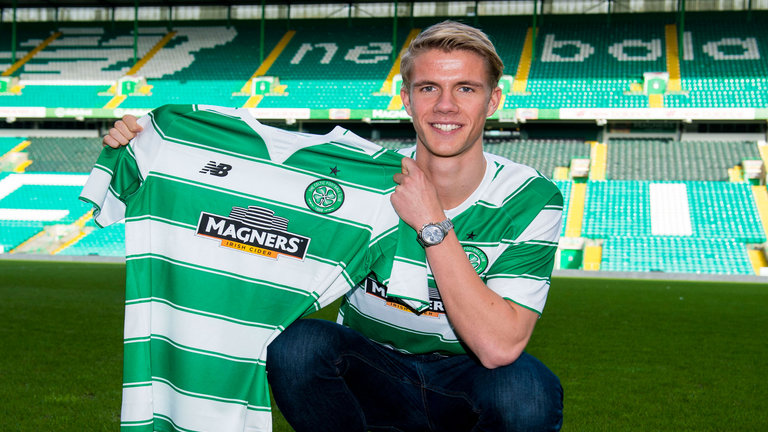 “He’s shown here that he can handle everything that has been thrown at him and I am sure he will do well in Scotland.

“People forget he is still only 18 because he has an adult head on his young shoulders.

“He’s been given a chance by going to a huge club and will go on to be a big star.”

The Hoops agreed a £750,000 deal for the teenager in February and his IK Start boss Steinar Pedersen also reckons he will impress Brendan Rodgers in the forthcoming months.
He said: “I have known Kristoffer from when he was at Lillestrom. He is very mature and has many, many good years ahead of him as a player.

“He always trains hard and I think his secret has been that he stays behind longer and has always been very willing to learn. He’s made excellent progress since he came to our club.

“Celtic will be a tougher environment for him, of course, and he will have to take the next step. But I know he’s got what it takes to succeed.”

———————
Charlie Gallagher? What a Player! – get a SIGNED copy PLUS a FREE copy of The Winds of Change only at CQNBookstore.com
ORDER HERE or click on the image below. Just order Charlie’s book and we will do the rest. Will make a great Father’s Day gift.