CELTIC step onto the £30million Champions League tightrope again when they face £200million man Neymar and his Paris Saint-Germain team-mates at Parkhead on Tuesday, September 12.

The Hoops have faced French opposition seven times in the past with five wins, six defeats and three draws from the 14 games.

The sequence kicked off in the historic 1966/67 season when Jock Stein’s team, after knocking out the Swiss champions FC Zurich on a 5-0 aggregate in the opening round, came up against Nantes at the next stage.

And it will be brought right up to-date a week on Tuesday when PSG arrive in Glasgow. While the money-bags French side will be favourites, it should be remembered that Celtic last season won the Treble and on each of the club’s previous treble winning seasons they went on to reach a European Final the following season!

While the Champions League Final is unrealistic why shouldn’t Celtic supporters have a realistic dream on progressing in the Europa League if a third place finish can be achieved in what is a very tough group. The Best Bonus Code for this season’s European adventure are clear. Enjoy the Champions League and progress to the Europa League after Christmas and after that who knows what could happen!

But back to the French.

Here is an extract from That Season In Paradise, published by CQN, to set the scene in our four-part series, The French Connection. If you order That Season in Paradise you will get a copy signed by Lisbon Lion Bertie Auld and the book is currently reduced to only £10. 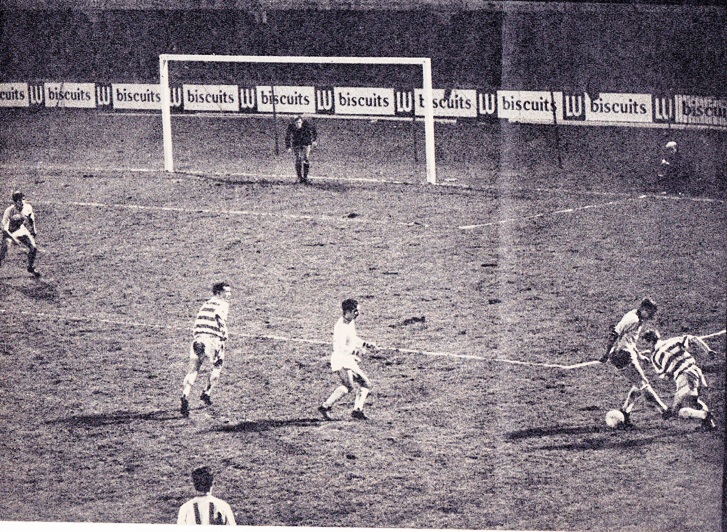 CELTIC’S final game of an eventful November in 1966 came in the European Cup Second Round first leg against Nantes, the excellent French club renowned for their flamboyant, attacking style.

Once again, Jock Stein’s outfit had been drawn against a team who had provided several players for their nation’s squad for the World Cup Finals in England, most notably Robert Budzynski, a tough, solid and dependable centre-half with the ability to pass the ball out of defence.

There was little doubt, though, of the Celtic player who had caught the imagination of the home support – Joe McBride, the thirty-three goal hitman who had been immediately christened ‘Marlon Brando’ by the French Press.

It was a nickname that baffled even the stocky Celt.

Goalkeeper Ronnie Simpson recalled: “The Malakoff Stadium proved to be a smallish ground and the game did not attract a great deal of people with the attendance given as 15,464. 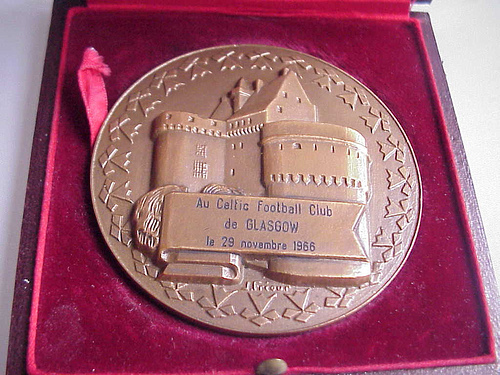 “In sixteen minutes, we were a goal down. Their full-back, Gabriel De Michele, had attacked down the left wing and pushed through a great ball to Francis Magny. We were caught open and he beat me with his shot, which was low and hard.

“But ‘Marlon Brando’ had us all-square in twenty-four minutes and, in the second-half, Bobby Lennox and Stevie Chalmers also got on the scoring charts. We deservedly won 3-1.

“The Man of the Match was undoubtedly Jimmy Johnstone.

“The French fans rose to him and applauded his trickery. The French newspapers called him “La Puce Volante” – “The Flying Flea” – and that’s what he must have seemed to the Nantes defenders as he jinked through their ranks with calculated danger.

“The boss told Jimmy before the game to keep taking the ball up to the full-back and to carry it past him and not to be disheartened if he failed.

“He was to keep trying to beat him. De Michele did stop him in the earlier parts of the game, but eventually Wee Jimmy had him so bamboozled that everyone was applauding him. Including me!

“The French team manager, Jose Arribas, did not really give much hope of saving the game at Celtic Park. When you lose a home tie 3-1, you’re in dead trouble.’

‘Marlon Brando’ and ‘La Puce Volante’ celebrated St Andrew’s Day alongside the rest of the Celtic contingent on the banks of the River Loire that evening and prepared for the rigours of a demanding December.

Jock Stein promised the Celtic fans an attacking display in the second leg and the manager was as good as his word.

Goals from Joe McBride, Bobby Lennox and Stevie Chalmers -the same three scorers in the first game – gave the Hoops a safe passage into the next round of Europe’s elite tournament.