LEWIS MORGAN is determined NOT to claim a hat-trick as he gears up for his breakthrough season at Celtic.

The 22-year-old attacker has looked lively in the opening Champions League qualifiers against FK Sarajevo as the Hoops eased to a 5-2 aggregate triumph to set up tonight’s second hurdle encounter against Estonia’s Nomme Kalju.

Morgan hopes to play his part after starting last week’s 2-1 win over the Bosnians and is desperate to seize the opportunity to continue to impress Neil Lennon.

The Scotland international winger has already had loan spells at St Mirren and Sunderland since joining in a cut-price £300,000 deal from the Paisley outfit in January 2018 and wants to make sure he does not go out on a temporary transfer again.

He insisted he wants to live the dream in Paradise and enjoy playing in front of sell-out audiences in the east end of Glasgow as the Hoops pursue nine successive titles to continue their domination of Scotland as well as making an impact in Europe after last term’s disappointment.

Morgan, speaking to the club website, said: “As goes with everyone, there’s competition for places all over the pitch. 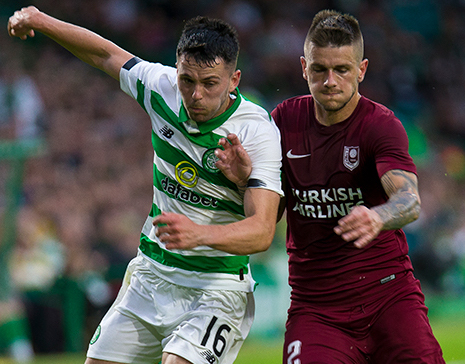 “It’s important that you take the chances when you can. There’s quality all over the pitch here and that’s only a good thing at the club.

“When I moved to Sunderland, I needed to get games. I enjoyed my time down there and, hopefully, I can use that a springboard at Celtic. It was only positive things that I took away from the experience.

”Everyone’s aim is to play a part here – the club is massive and the manager has given me a chance so far. He’s been clear on what he wants from me and he wants me to bring a new dimension in the team.

“I play most of my football at left wing, but I don’t care where I’m playing. I like playing off either side, but, hopefully, being adaptable can give me more opportunities to play.

“At the moment, I take it every day as it comes and you can never take anything for granted in football. I want to improve week and week and, hopefully, I can push myself into the starting XI.

“To be here and playing is a privilege, I don’t take that for granted and I’m working hard every day. There’s no crowd like the one we’ve got at Celtic Park. Any player can be taken aback by that and that’s something I’m hoping to sample more of.”