Today, in Part Ten of our fascinating look back at these landmark times in the annals of fame at a momentous football club, we continue as Big Jock leads the club to sold-out Hampden Park for a confrontation with Rangers in the Scottish Cup Final on Saturday, April 26, 1969.

GEORGE CONNELLY had just turned twenty years of age the previous month and was a relatively unknown quantity among the Celtic first team squad,

However, after his supreme appearance in the Scottish Cup Final against Rangers at Hampden in 1969, the Fifer was the player most acclaimed by the delighted followers of the newly-crowned treble winners.

Connelly, though, should have been nowhere near the Parkhead first team that eventful afternoon when Jock Stein’s all-conquering line-up completed their second silverware clean sweep in three years.

A suspension to Jimmy Johnstone opened the door for the precocious youngster as the Celtic manager revamped his tactics against his club’s obstinate foes from Govan. In fact, Rangers had struck a rich vein of form nearing the end of the season and had decimated a strong Aberdeen line-up 6-1 in the Scottish Cup semi-final at Parkhead on the same afternoon Stein’s men had overcome Morton 4-1 at the national stadium.

The bookies, those characters with cigars the same size as rolled umbrellas and professionals who rarely indulged in errors where money is concerned, actually made the Ibrox outfit favourites to lift the trophy. Certainly, history was on Rangers’ side – they had yet to be defeated in a Scottish Cup Final for forty years. Their Parkhead opponents hadn’t beaten them in the competition’s ultimate showdown since 1904. 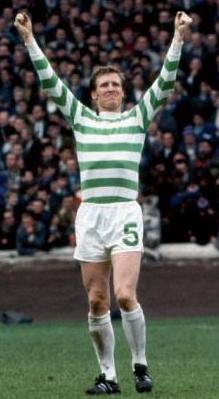 HAIL CAESAR…Billy McNeill accepts the acclaim from the Celtic fans at the end of a grande finale at Hampden.

Celtic would also be forced to line up without their balletic battering-ram John Hughes on the left wing. The twinkle-toed powerhouse had been getting twice-daily treatments on a leg injury during the week leading up to the grand finale, but had failed a late fitness test. Harry Hood, a clever, ball-playing forward bought from Clyde for a club record £40,000 the previous month, was unavailable as he was Cup-tied following a previous appearance in the competition for the Shawfield outfit.

Stein, on the face of it, looked to have team selection problems. Rangers, too, would be without £100,000 striker Colin Stein, whose rumbustious, up-and-at-’em approach to the beautiful game had brought a red card too many and his ‘reward’ would be a seat in the stand that afternoon. Alex Ferguson led the line against Celtic; he wasn’t to know it, but it would be his last outing for the club.

It was hardly a secret that Jock Stein enjoyed deploying wingers in his team and Jimmy Johnstone, on the right, and John Hughes, on the opposite flank, had been potent threats that particular season. Now, though, he had to plan for a crucial confrontation without their services. Davie White, the youthful Rangers manager at a mere thirty-five, was ready to pit his tactical wits against his dug-out opponent. He lost big-style.

NUMBER ONE…Norrie Martin can only look forlornly at the ball in the back of the net as Celtic celebrate Billy McNeill’s opener. 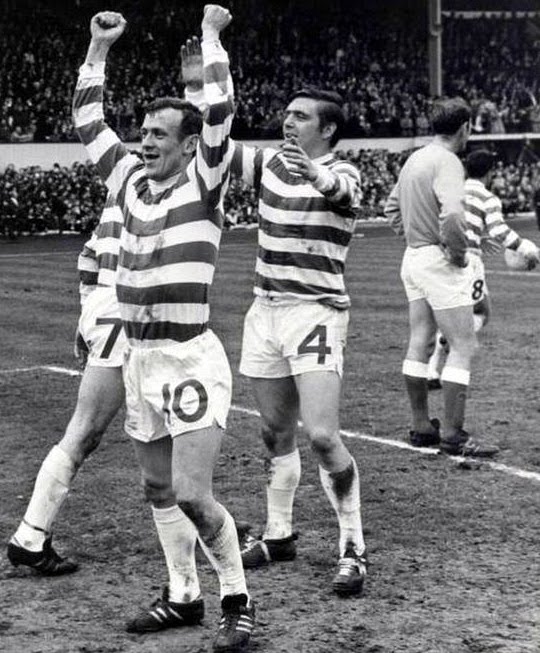 NUMBER THREE…George Connelly prepares to waltz past grounded Norrie Martin to roll in a memorable effort. 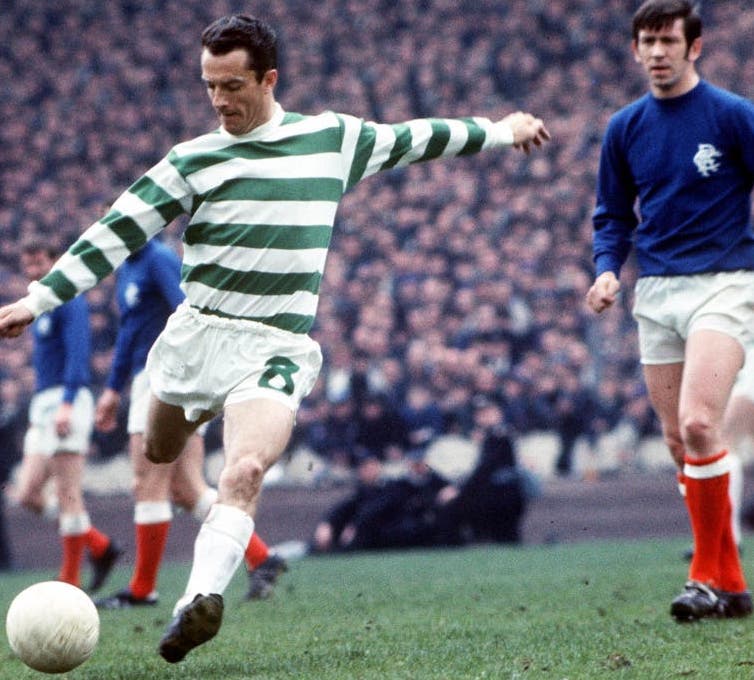 Stein created a Celtic eleven that would largely ignore raids on the flanks, although, of course, full-backs Jim Craig and Tommy Gemmell would be encouraged to join the attack whenever possible. Connelly was given the No.7 shorts and Bertie Auld, who had kicked off his career as an outside-left, appeared to have been given the opportunity to reprise the role. White, apparently, accepted the dangling carrot.

Neither Connelly nor Auld played as wide Bhoys in the game. Stein manoeuvred the pair into withdrawn midfield roles which flummoxed the Ibrox full-back pairing of Kai Johansen and Willie Mathieson. Without direct opponents to deal with, the defensive duo were enticed further up the field and Stevie Chalmers and Bobby Lennox, two forwards gifted with searing pace, were ordered to  expose the space behind Johansen and Mathieson. It was half-time before the confused White could attempt to sort out the mayhem in his defence.

By then, it was a tad too late – Celtic were leading by three clear goals and were well on their way to picking up their twentieth Scottish Cup. 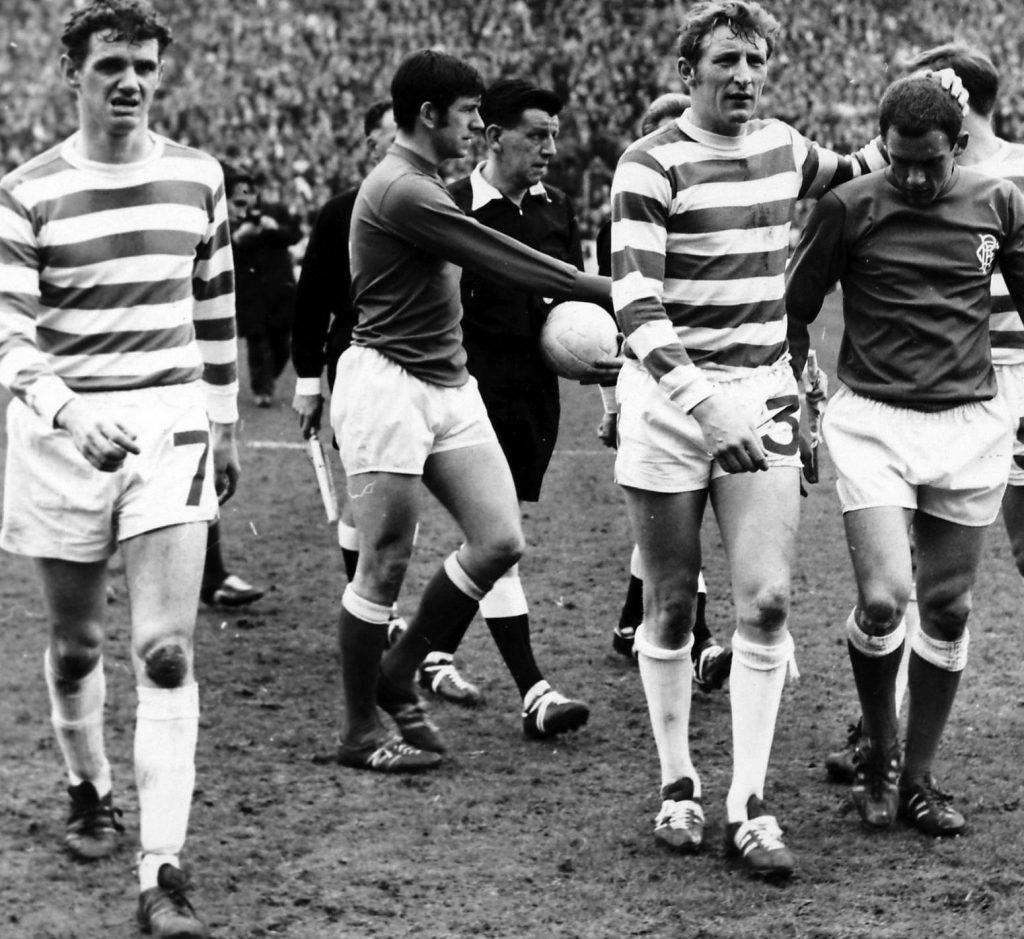 Stein couldn’t have wished for a more enterprising start. A corner-kick was claimed on the left-wing and Lennox trotted over to take it, as he had done so many times in the past. His curling delivery eliminated the Ibrox players at the near post and skipper Billy McNeill was generously allowed a clear run at the ball. Majestically, he leapt and, straining his neck muscles to the limit, snapped his head forward, made perfect contact with the sphere and guided a header into keeper Norrie Martin’s right-hand corner.

Alex Ferguson had been told to mark the Celtic captain at set-plays. He was marked absent on this occasion. Afterwards, he was blamed by his Ibrox paymasters for the loss of the crucial goal and his ‘crime’ was deemed punishable by a lifetime banishment from the Rangers first team. Six months later he joined Falkirk.

With the Rangers back lot still attempting vainly to unravel the conundrum that was presented before them, Celtic took full advantage by scoring two quickfire goals before the half-time whistle. George Connelly was a key player in both strikes.

A minute from the interval, he intercepted a ball from Swedish winger Orjan Persson intended for Mathieson. With praiseworthy speed of thought, the youngster diverted a pass to Lennox who enjoyed the freedom of Hampden as he sped through before burying the ball behind the exposed Martin. 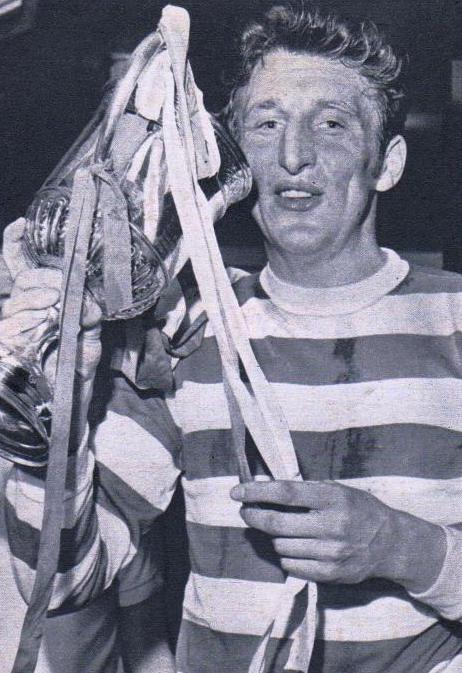 CHEERS…Tommy Gemmell prepares for a sip of bubbly in the newly-won Scottish Cup.

Precisely seventy-seven seconds later, Celtic eased to an unassailable three-goal advantage and it was the elegant Connelly who delivered the coup de grace. Martin, possibly still reeling at the loss of the Lennox goal, attempted a short goal-kick to his skipper John Greig, who clearly wasn’t expecting the pass. He as tried to bring the ball under control, Connelly sauntered in, took it from him, sidestepped the goalkeeper and rolled a lazy effort into the net. The Celtic end in the 132,870 attendance erupted in joyous bedlam.

It was all over long before Stevie Chalmers, fourteen minutes from time, was invited to utilise the wide, open spaces of the playing field as he ran in unopposed before lobbing the ball over the right shoulder of the transfixed Martin.

Bertie Auld exclaimed afterwards: “I saw that performance from us twice; once today on the Hampden pitch and once on the manager’s tactics board yesterday.” Mischievously, he added: “You could say everything went according to plan.”

* TOMORROW: THE JOCK STEIN YEARS (PART ELEVEN): Another season, another championship to be won.