ABOUT fifteen months after I returned to Celtic in January 1965, Jock Stein did something I am certain did so much to set Celtic off on their unstoppable glory run that would see nine successive League titles, among so many other honours, sweep into Parkhead.

The Boss arranged a trip to America where we would stay for five weeks and play eleven games. We met Spurs three times, beat them twice and drew the other. We drew 2-2 with Franz Beckenbauer’s Bayern Munich, drew 0-0 with Bologna and beat the Mexican champions Atlas 1-0. We played in places such as New York, Los Angeles, Bermuda, New Jersey, St.Louis and San Francisco.

Those were exciting times and we came up against a few select teams along the way, hammering all sorts of opposition. Tommy Gemmell actually badgered Big Jock into allowing him to play at centre-forward in an encounter with a Hamilton Select. TG did okay – he netted a hat-trick in an overwhelming 11-0 success. The star of the trip, though, was undoubtedly Bobby Lennox who scored nineteen goals!

You think you know a team-mate when you are training with him most days and playing in games. It doesn’t even come close to the camaraderie that emerges on a trip such as that. The players were just about living out of each other’s suitcases. 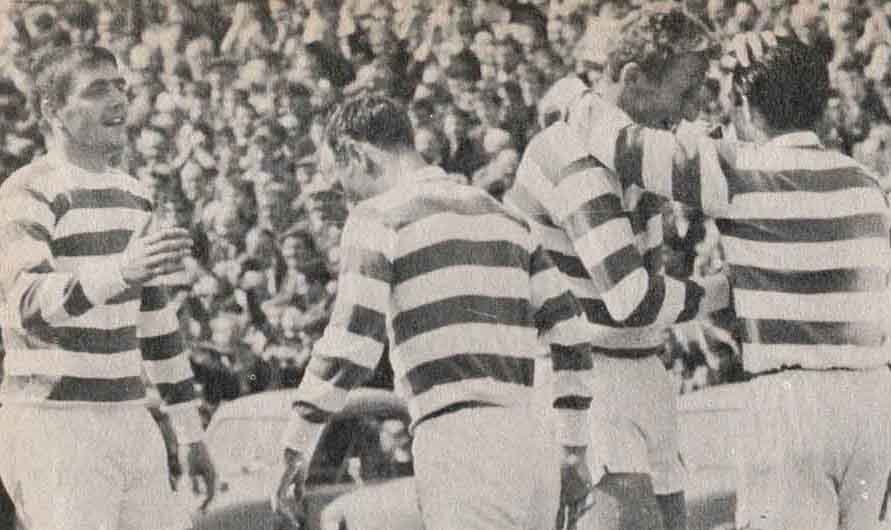 Obviously, as I have said, we were constantly on the move and someone might have forgotten to get his laundry done. So, Stevie Chalmers or anyone could come to your hotel room and see if they could borrow a shirt or trousers or a jacket. Guys of the size of Caesar and TG must have done a few swaps with each other. These are just little things, of course, but it does help you get even closer to your team-mates.

If that was the aim of Big Jock when he put the tour together then it was a massive success. We were close before we stepped on that plane to take off on our great adventure. We had completely bonded by the time we got home.

We played a few friendlies as we prepared for our record-breaking 1966/67 season. The main one was obviously the visit of Manchester United to Parkhead. Now I have heard it said that the Old Trafford side were under-strength for that meeting. I believe my pal Paddy Crerand has gone on record as saying they were without Bobby Charlton and Nobby Stiles, who had won the World Cup with England that summer.

BOBBY DAZZLER…Manchester United keeper Harry Gregg is left helpless as Bobby Murdoch lashes in the second goal in the 4–1 pre-season romp in 1966.

Paddy, my old chum, your memory is playing tricks on you. The guy who wore the United No.6 shirt that afternoon looked an awful lot like Nobby Stiles and the bloke in the No.9 jersey was the spitting image of Bobby Charlton. They played against us that day and so, too, did Denis Law and George Best.

I’ve got the video evidence to prove it, It was a top side Sir Matt Busby fielded against his pal Big Jock and we still slaughtered them 4-1. We were exceptional and, believe me, United gave it all they had. They would go on and win the English Championship that season and then emulate our feat of lifting the European Cup a year after us.

However, we took them apart with a quite marvellous exhibition of attacking play that left Crerand, Charlton, Stiles, Law, Bestie and all their other international stars in the shade.

There was no stopping us after that.

* CQN wishes all our readers a very Happy New Year and we hope 2022 is a successful and memorable one for you and yours – and Celtic, of course!