Celtic Quick News on News Now
You are at:Home»Latest News»‘THEY COULD HAVE HAD FIVE OR SIX,’ INSISTS EX-CELT
By CQN Magazine on 20th October 2021 Latest News

FORMER Celtic goal hero John Hartson insists his old team could have had “five or six” against overrun Ferencvaros yesterday.

The Hoops put in a pulverising second-half performance as the Hungarians started to wilt under the pressure in the crucial Europa League Group G encounter at Parkhead.

It was scoreless in the first 45 minutes, but Ange Postecoglou’s side opened fire after the break with Kyogo Furuhashi claiming the opener im the 57th minute following a dream probing pass from Filipe Jota.

BY THE RIGHT…Kyogo Furuhashi slams in Celtic’s opening goal.

An own goal in the 81st minute was reward for ruthless play from the home side, roared on by a vociferous crowd during the unusual afternoon kick-off, but the scoreline could have had a different complexion had the team taken the opportunities that came their way.

Skipper Callum McGregor, who put in a superb 90-plus minutes, saw his penalty-kick saved while substitute Giorgis Giakoumakis, David Turnbull and Jota squandered opportunities that should have been put away.

Hartson, who scored over 100 goals for the club, told BT Sport: “It’s great for confidence. In a couple of weeks time they are going across to Budapest and they will go there with great confidence knowing they can comfortably beat this side. 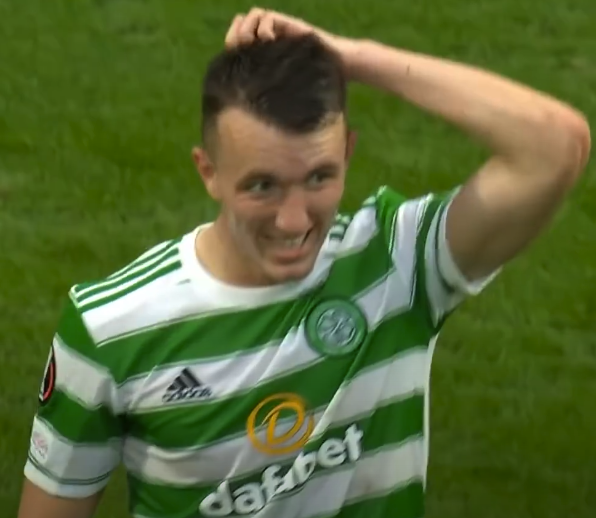 “I said they were no big shakes before the game and I really fancied Celtic coming into the game.

“I think Celtic were just relentless and they could have had five or six.

“The goal from Kyogo and the ball from Jota is inch perfect, and Kyogo the way he takes it is unbelievable. The finish is spectacular. This goal, special, special players do it.”

The Hoops travel to Budapest for the fourth game in their section a fortnight tomorrow.