NIR BITTON believes it will be third time lucky for Celtic when they face Molde in their next Europa League tie.

The Hoops have led three times in their two games against Ajax and Fenerbahce before being forced to settle for back-to-back 2-2 draws.

However, the Israeli midfielder reckons a repeat of their first-half display against the Turks should be good enough to gain a victory against the Group A leaders in Norway on October 22. 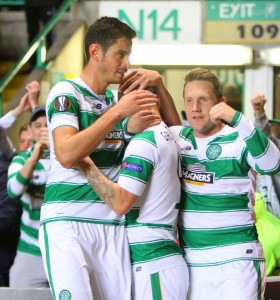 He said: “I think we played very well, we pressed them high, we did exactly what the gaffer wanted us to do and we need to be positive for the next game.

“And if we play like we did in the opening half, then everything will be fine for us. We were leading 2-0, but when you play against teams at this level and make mistakes, you get punished.

“The next game is crucial for us and if we get a good result over there then everything is open for us.

“But it’s too early to talk about that just now. We have league games and an international break, but when the Molde game comes around we have to be prepared for a difficult game and hope we can win.”

Bitton also praised 18-year-old left-back Kieran Tierney who made his first appearance in Europe against the big-spending Turks.

He added: “For a young lad to make his European debut against Nani and those type of players, he did very well and he just needs to keep working.

“I wasn’t surprised that he played so well because I’ve seen him in training every day and you can see that he’s a good player.”