Celtic Quick News on News Now
You are at:Home»Latest News»‘THIS IS THEIR TIME’: LENNY APPLAUDS THE CELTIC PLAYERS
By CQN Magazine on 19th May 2019 Latest News

NEIL LENNON has taken a step back to applaud the efforts of the Celtic players as they head for an unprecedented season of overwhelming success.

The interim manager, who accepted the post in February following the sudden exit of Brendan Rodgers to Leicester City, has led the team to their eighth successive title – after starting the run in 2011/12.

Lennon has been in charge for 10 Premiership encounters with only one defeat – last week’s disappointing and frustrating performance at Ibrox – while clinching the flag with an emphatic 3-0 triumph over Aberdeen at Pittodrie seven days earlier.

The Irishman has also guided them through the Scottish Cup minefield of a quarter-final tie against his old club Hibs at Easter Road and a last-four tie against Aberdeen at Hampden with five goals scored and none conceded. 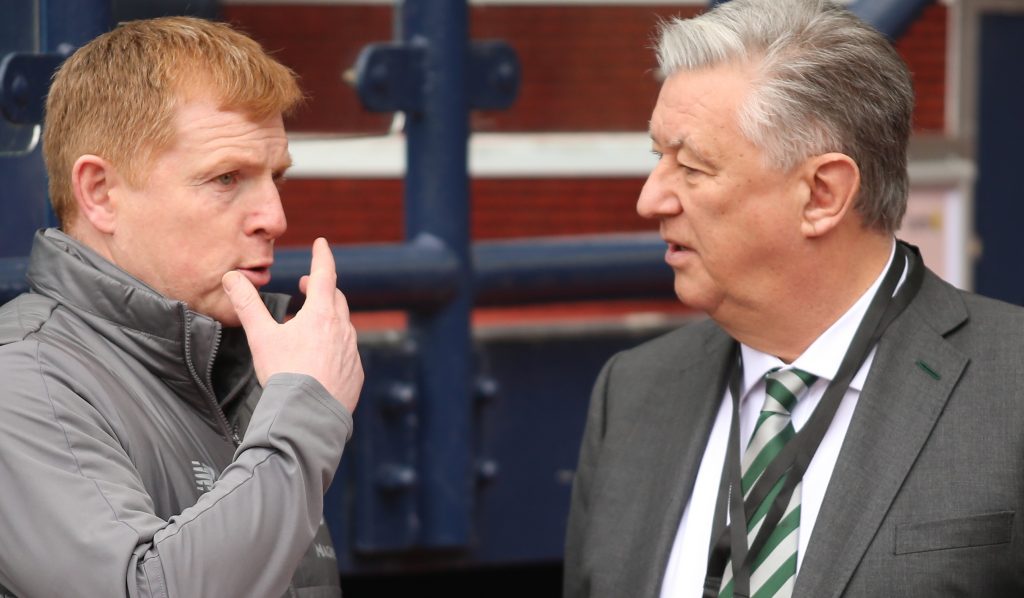 TALKING HEADS…Neil Lennon and Peter Lawwell have a chat before a game.

On Saturday, the the historic date of May 25, Lennon will take the team back to the national stadium for the grand finale against Craig Levein’s Tynecastle outfit where the club can win a phenomenal ninth consecutive piece of domestic silverware.

Lennon, though, is not interested in personal plaudits. Instead he directs the praise to the men who do the business on the field.

The former skipper, speaking to the Sunday Mail, said: “The ownership of it belongs to the players. This is their time.

“They’ve already done something remarkable with the double treble and it’s ridiculous that we’re even sitting here talking about them doing a treble treble.

“So, my feelings will be more delight for the players than myself because I know what it’s like to do something special at a club like this.

“And they have the opportunity to do something special again.

“What they can do has never been done before, so that’s how difficult it is. We were delighted in 2001, euphoric to win the treble. It was the first one since the late sixties and these boys are on the cusp of the third one in a row.

“It is amazing what they’re doing. Take stock, step back and have a look at it for what it is. It is remarkable, really.

“Never say never, but I think we are talking a long, long time before anything ever comes close.

“But we have to negotiate the Cup Final first before we can start talking about that. My feelings will be more for them than anyone else.

CUP CRACKER…James Forrest flashes in a devastating drive in the 3-0 semi-final success over Aberdeen.

“The Cup Final is the one outstanding game left in the season.

“It’s the last one, there’s fatigue there, so they need to come down off it a little bit in terms of rest and recovery. We want them peaking again for the Cup Final.”

Lennon knows all about the pitfalls in the national competition from personal experience. He recalled one of the worst setbacks of his career, a Scottish Cup game against Clyde at frostbound Broadwood in January 2006 which was Roy Keane’s Hoops debut.

Gordon Strachan was in charge of the champions and the holders of the trophy were expected to stroll past the part-timers. Instead, the Parkhead men toppled to a remarkable 2-1 loss and Lennon reckoned that will act as a reminder that the present team’s 26 straight knock-out wins doesn’t guarantee them 27.

He added: “You have to get it right and I know because I have been knocked out of Cups as a player and a manager where, if you’re not right on the day, then you get done. No matter who the opposition is.

“We got knocked out by Clyde one year. If you are not bang at it, and maybe last week is a wee reminder, you can get beat. But the players know what is at stake next week.”

*DON’T miss the unbeatable match report from Celtic v Hearts this afternoon – only in your champion CQN.