Celtic Quick News on News Now
You are at:Home»Latest News»WE CAN WORK IT OUT: TAYLOR’S TARGET
By CQN Magazine on 26th January 2021 Latest News

GREG TAYLOR and his team-mates are aiming for Celtic’s first win in 2021 when they take on Hamilton Accies at Parkhead tomorrow night.

This year has turned into one giant banana skin for the Hoops with an own-goal loss at Ibrox, subsequent draws against Hibs (1-1) and Livingston (0-0) in the east end of Glasgow with the champions missing 13 players and Neil Lennon due to Covid-related issues.

Then there was the dismal 2-2 stalemate in West Lothian last midweek when the team once again surrendered a lead as the side took their dropped points to nine in four outings.

It has been a dreary sequence as the champions have lurched 23 points adrift of the Premiership pinnacle in their quest for a historic 10 in a row.

It seems a lifetime ago Celtic kicked off the season with a 5-1 romp over the Lanarkshire outfit on Flag Day on August 2 when Odsonne Edouard notched a hat-trick and Jeremie Frimpong and Patryk Klimala added the others.

The Scotland international left-back acknowledged the team must get back on track after their stumbles this month.

Taylor, speaking to the club website, said: “It’s a disappointing run after the way we had been playing towards the end of the year. Even in the game against Rangers, I thought we played really well, but, unfortunately, couldn’t get the win. 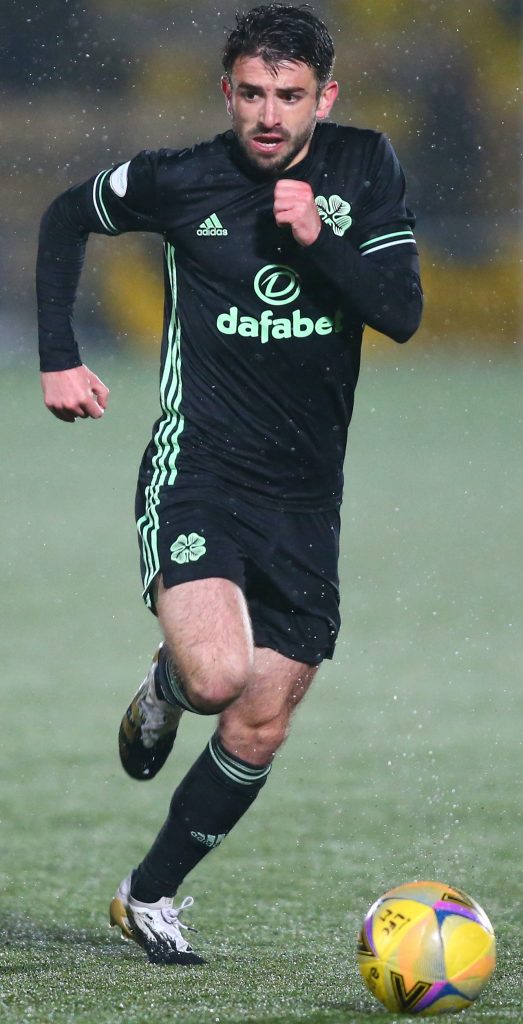 ON THE BALL…Greg Taylor surges into attack in the 2-2 draw at Livingston.

“Since we’ve come back, the results have definitely not been good enough – nor have the performances – and it’s a period we’ve got to work through.

This game is the next opportunity to get a win and it’s one that we’ve got to take. We’ve been working hard to right the wrongs and put on a performance. And, hopefully, that will be something to build on and take it into the remaining games.

“We’ve been training every day since the Livingston game in preparation for tomorrow. I would rather have had a game at the weekend and just get back out there, but, at least, we’ve had those few days of training to work on things.”

Edouard is likely to come back from the knee injury that kept him out of the 2-2 deadlock against Livi.

The Frenchman, who has had a fairly frustrating campaign, will hope to add to his seven league goals when he faces Accies.