SCOTT BAIN insists Celtic are in good shape as they prepare for tonight’s Champions League qualifier against Cluj in Romania.

The keeper could have caught up with his reading during the 7-0 rout of St Johnstone in the Premiership opener at Parkhead on Saturday with the Perth side failing to register a solitary shot on target throughout a one-sided 90 minutes.

But Bain realises it will be a different story this time around in the first leg of the third round qualiifier against Dan Petrescu’s men and it could be a question on the Hoops digging in to get a favourable result to bring back to Glasgow for Tuesday’s return leg.

Neil Lennon started with Craig Gordon in goal for the 2-0 victory over Nomme Kalju in Estonia last week, but the 36-year-old Scotland international could step aside on this occasion.

Bain, speaking to this week’s Celtic View, said: “It’s going to be a really difficult game. They like to work hard and put balls into the box.

“It’ll be a tough tonight, but we need to go full of confidence from the result we had at the weekend. We come in with a game-plan and, hopefully, we can stick to that and win. 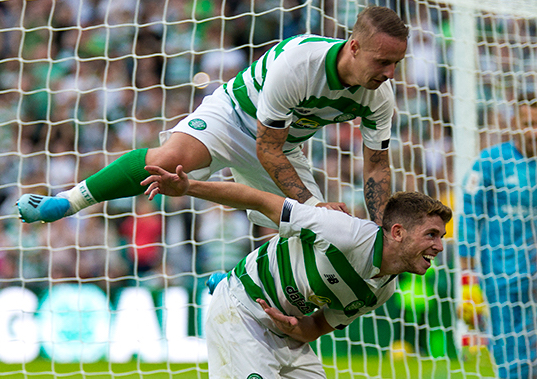 HOOP, HOOP AND AWAY…Leigh Griffiths congratulates Ryan Christie after a strike against Kalju.

“If we want to make the Champions League, we need to get through these sorts of ties. We know it’ll be a challenge, but we’re in good shape.”

The 27-year-old shotstopper, who has played in the three other Euro ties against FK Sarajevo (twice) and Kalju, added: “I’m not really sure if it’s better to play away or at home first, but if we can get a result to take home, then that sets us up very well for the return leg.

“The fans love to follow the club. You can’t ask any more of them, and they always create a brilliant atmosphere, no matter their numbers and we want to come away with a result for them.

“Cluj’s style of play is nothing that we haven’t come up against before, but these are ties that you need to win in order to get through to the ultimate prize.

“We need to be prepared to dig in but if we can perform to our highest level then we’ll be in good shape for the home leg.”