CRAIG GORDON has revealed it was good to talk to Leigh Griffiths at half-time in the Hampden dressing room.

The striker had come on as a 33rd-minute substitute for hamstring victim Moussa Dembele with Celtic leading 1-0 in Sunday’s Scottish Cup semi-final.

Gordon admitted: “I said to him at the interval: ‘Come on now, Leigh, you are the main man for however long that may be.

‘Get out there and show everyone what you can do’.

“And, to be fair to him, I thought he was fantastic for us when he came on.

“He has been unlucky this season with a few injuries, but there is no doubting his quality.

“It was only last season that he scored 40 goals and he is a real threat whenever he plays. He always hits the target and he is a player who is a real handful.

“We have no problems in the striking department, that is for sure.

“He has waited for a chance and even though he has been in and out, he has a great scoring return and, hopefully, now we’ll see a hungry Leigh Griffiths between now and the end of the season.”

The pacy frontman, who has claimed 14 goals in a stop-start campaign, was hauled to the ground by James Tavernier to earn the Hoops a penalty-kick shortly after the turnaround.

Scott Sinclair slotted it away and Griffiths almost netted a third only moments later with a sublime touch from a long Gordon free-kick and explosive shot that was tipped over the crossbar by Wes Foderingham.

The Scotland international could now be in line for an extended run in the first team and the goalkeeper reckons that will benefit the nation’s World Cup hopes.

Gordon said: “It’s good news for Scotland, too. He will get a bit of game-time now ahead of the match against England and I am really pleased for Leigh because he is such a big player here.”

The 34-year-old in-form goalkeeper reflected on the champions’ Hampden performance and added: “We controlled the game for the most part.

“They came into it more in the last 20 minutes when they had to come out and have a go, but it was nice then that I got to make a wee contribution. 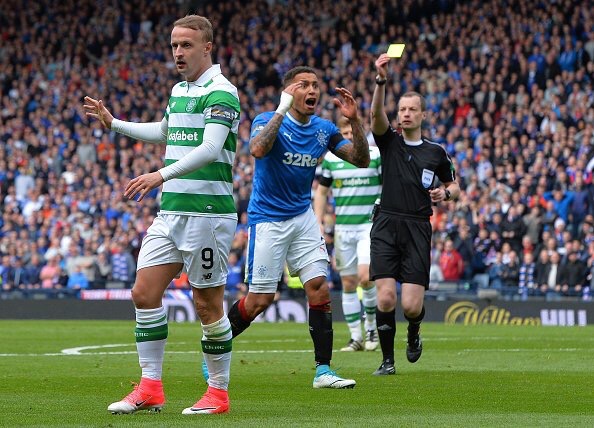 “However, I have to say I thought the lads in front of me were brilliant. They we were fully focused on how we wanted to play and we really stuck to our game plan and performed the way that we wanted to.

“The manager was happy about how we went about our business. We wanted an early foothold in the game.

“We really imposed ourselves and created a lot of chances and I thought that was reflected in the scoreline.

”And we will approach Ibrox on Saturday in the same way that we prepare for every game now.

“We will look at this game and take the positives from it and there are always one or two things we feel that we can do better.

“Rangers (sic) are at home, so they will want to come out and make a mark.

“But we are confident, we have a lot of belief in ourselves and we will go there in the same frame of mind that we have gone into every game this season.”