There has always been a business case for someone to transform Aberdeen into a bigger club.  The town is a prosperous city, with a substantial corporate entertainment budget.  Aberdeen is a long way from the supporter magnet of Glasgow.  Dundee is 25% smaller and splits support between two clubs.

The takeover of the club, announced yesterday, will see Stuart Milne depart the scene after a 22-year reign which saw one trophy and one bottom of the league finish (they avoided relegation due to reconstruction).  Milne leaves the club in better shape than he found it, but his tenure shows a trophy count no better than eight other clubs during that period, and worse than four.

New chairman, Dave Cormack, will invest around £5m straight away, £2m of which comes from AMB Sports & Entertainment, a US company which owns MLS club Atlanta United.  Atlanta’s president, Darren Eales, will become a director of Aberdeen.  Details of a “strategic partnership” between Atlanta and Aberdeen will be announced today.

If you go into partnership, pick your partner well, and Aberdeen had picked spectacularly well.  AMB owner, Arthur M Blank, co-founded The Home Depot and as well as Atlanta United, AMB own NFL side, Atlanta Falcons.  They also operate the most spectacular stadium in the world, the Mercedes-Benz Stadium. 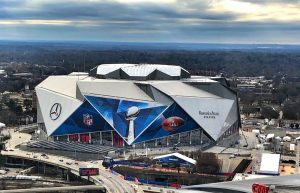 My expectation is that Aberdeen will learn simply by being in the same room as the people who recently took the sports spectator experience to a new level.  AMB are not in Aberdeen for the weather, their objective will be to win in Scotland and compete in European group stages.

We might just get that rarest of treats, a sustainable and genuine domestic challenge.   This could be the most significant strategic development in Scottish football for years.  And if anyone suggests we move an Aberdeen-Celtic league game to the Mercedes-Benz Stadium, bite their hand off.  I’ve wanted to go since I first saw the design plans.

I see lots of people having a go at Sam Allardyce for saying “We can all go to Celtic and win trophies.”  The last man to break this rule, John Barnes, left Scotland 19 years and 9 months ago, so let’s not quibble with Sam.