And the Hoops hitman, on target for the second successive Premiership game with a trademark free-kick in the 5-2 win over Motherwell at Fir Park yesterday, believes “the sky’s the limit” for his 21-year-old team-mate.

Ajer answered the right-back SOS from manager Neil Lennon for the fourth time this season when he turned out in the No.2 position following Hatem Abd Elhamed’s injury sustained in the 1-1 Champions League third round qualifier against Cluj in Romania during the week.

And it was the giant Norwegian international, who was signed by Ronny Deila as a midfielder from FK Start in January 2016, who came to the rescue after the champions gifted the home side the advantage when Liam Donnelly slammed in a low drive in the 12th minute. 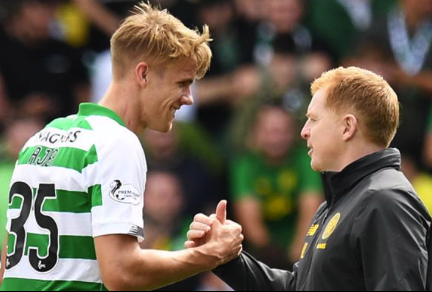 WELL DONE, MY BHOY…Kristoffer Ajer is congratulated by Neil Lennon.

Ajer raced half the length of the pitch to start and finish the move that saw Neil Lennon’s men wipe out Well’s lead within two minutes to set the tone for a second successive Saturday romp with Griffiths, James Forrest, Odsonne Edouard and Ryan Christie also getting in on the act.

The Scotland international frontman, speaking to the Sunday Mail, said: “The sky’s the limit for Ajer.

“For such a young lad, the world is at his feet.

“He reminds me of Virgil, but Virgil wouldn’t have been happy playing at right-back!”

After the five-star showing, versatile Ajer beamed and added: “I am happy to play right-back. I am just happy to be in the team and do my best whenever I can.”